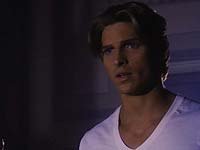 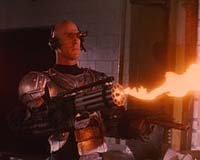 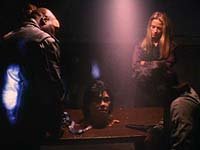 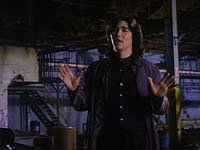 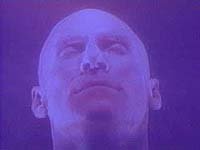 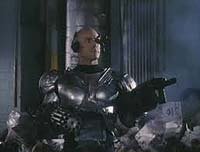 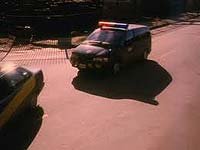 The trouble this time is that some evil guys are using Cyber Tracker technology for some reason and to do that they have a Cyber Tracker who looks like the newsreader kill some guy in public and the next thing you know the police have a Cyber Tracker out hunting for the newsreader. In a direct steal from (On Golden Pond), the Cyber Tracker grabs a truck just like (Henry Fonda) did in that film and chases our heroic couple through L.A.'s storm drain system. Things get worse when a Cyber Tracker turns up looking like Don "Man in drag" Wilson at a police station and starts wasting scores of policeman, just exactly like (that scene in Kramer Vs Kramer where the kid gets fed up choosing a parent and goes and kills loads of cops in a police station).

So the real newsreader, the real Don "The Serpent" Wilson, Jared and some other guy have to deal with loads of Cyber Trackers, corrupt businessmen using cyborgs to their advantage, just like (Mac and Me), the cops being on their trail, and robots with their own faces trying to kill them. Luckily, the robot newsreader gets covered in liquid nitrogen and then shot, just like (that bit in the Greatest Story Ever Told when John Wayne's character covers Jesus in liquid nitrogen and shoots him, causing Jesus to break into loads of little pieces, taking three days to pull himself back together again).

In a highly original film like this, they pull a 360 turn around and have one cyber tracker reprogrammed to help out the good guys, just like (that bit in Forrest when a re-programmed Bubba comes back from the dead to help Tom Hanks and wins the Vietnam war single handedly). I enjoyed this more than the first one for some reason, probably as it reminded me of better films like (Steel Magnolias springs immediately to mind).

Review by Bezenby from the Internet Movie Database.