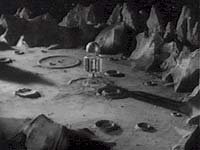 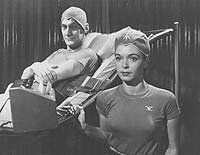 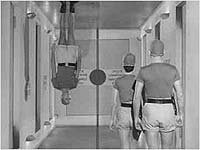 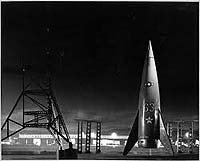 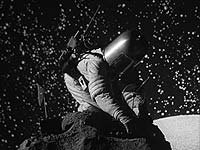 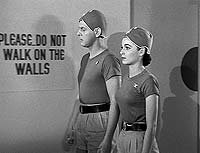 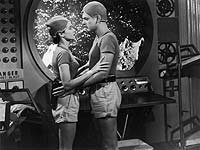 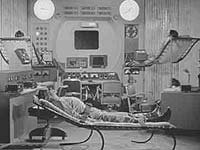 Project Moon Base was made in 1953. Science Fiction movies had come a long way in the 3 years since Destination Moon and Rocketship X-M. Here we are given a glimpse of the future, projected to 1970, and it is a future with the US fully embracing space exploration. The look of the rockets and the overall plan for space exploration presented in the movie seems to be very closely based on the Collier's magazine series on space travel which ran from '52-'54. So this movie would have been very current when it first came out. I have to say, it is a wonderful vision of space exploration. The rocketships, spaceport, space station and moon lander are well done miniatures and the star backgrounds and lunar landscape are also well done.

Robert Heinlein is credited with co-writing the screenplay, which tells a sophisticated story of (presumably Soviet) attempts to infiltrate an agent into the US space station and destroy it before a moon base is constructed. This is the surface story of the film, which is handled well in terms of how the space program works and how an agent might try to infiltrate it, but wow does it play out poorly. The scenes with the agent in the ship are really cheezy and amateurish. One of the clues that the impostor scientist is really an agent is that he does not know of the Brooklyn Dodgers - an old WWII trick for trapping enemy agents, but it seems silly here. The sabotage plans are foiled by our heroes (in an embarrassingly bad action scene) but the moon lander is stranded on the lunar surface without enough fuel to blast off.

So far so good. But the real story lies beneath all this. It is a story of sex and gender politics in the workplace. And this subtheme is dialed way up! It takes over the movie. In the 1950s women began entering the workplace as equals with men, for the first time ever. Oh they had been allowed descent jobs as secretaries (complete with other implications), and during WWII many women took over men's jobs as the men went off to war, but now it is post war...can educated women work alongside men? Can they supervise men? Will men be threatened by this? Many of the sci-fi movies of the '50s explore this theme, but I have not seen one that could surpass the intensity of this movie. It is out of control and really must be seen to be believed.

Col. Briteis (Donna Martell) is the commander of the spaceship. To say she has a rough time in the world of men is an understatement. When we first meet Col, a general tells her she was chosen for this mission for political reasons, not for competence, then he threatens to spank her! Wow. Bear in mind this is the beginning of the movie. Of course all the men pronounce her name 'Bright-Eyes' and oh boy there are plenty of winks and nods. Throughout the movie men are constantly correcting her, laughing at her and patronizing her. For the time period of the film, this is probably all in good fun, but from a 21st century vantage point it is hard to watch and is much more uncomfortable than funny. Bright Eyes...er I mean Col. Briteis...dominates the film, and this is a good thing because she is very sexy. She gets my all-time award for a performance during a blast off. Most everyone else in this obligatory scene looks as if the crushing force of gravity is torture, but with her it looks like...ecstasy.

To continue the gender politics theme we have a female US President, and an assertive woman reporter. But ultimately the menfolk need not worry. At the end of the movie the alpha male co-pilot is promoted over Briteis, so male authority is re-established in the nick of time. And he marries her while they are stranded on the moon, so '50s family sensibilities are fully protected.

I wish that Coronel Briteis was given a role in which she was depicted as competent instead of petulant. That would have made this movie brilliant and way, way ahead of its time. As it is the movie can be awkward to watch. But if Project Moonbase has any claim to fame, it has Donna Martell, the sexiest rocket girl of the '50s.

Review by retrorocketx from United States from the Internet Movie Database.