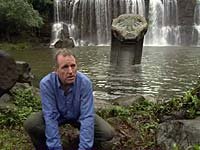 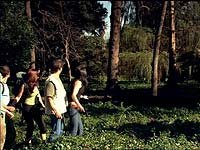 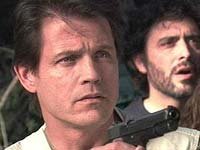 Cobra starts as 'One Planet' environmentalist Jerry Ryan (Ryan McTavish) & his girlfriend Carrie (Renee Talbert) hire Captain Michael Stoddard (executive producer Michael Paré) to take them to an island in the South Pacific, at first Stoddard is reluctant since the island is a top secret military research base but soon changes his mind when a load of cash is offered. Along with TV news reporter Sandra Crescent (Jeri Manthey) they set sail for the island & once ashore find out that the military have been funding illegal DNA genetic experiments which have resulted in huge Komodo Dragon's & King Cobra's that have eaten almost every other living thing there & Stoddard & co are next on the menu...

Co-written & directed by the ever awful Jim Wynorski under his Jay Andrews pseudonym this is just plain awful, this is just plain hard to sit through & is even worse than the usual rubbish 'Creature Features' the Sci-Fi Channel have the nerve to air if that's possible. The script is terrible, predictable & utterly boring, some giant monsters of some sort are created by scientists messing around with DNA, a group of people are trapped with said monsters & have to try to escape being eaten. That's it, that's the whole plot of . Cobra, maybe this was trying to rip-off AVP: Alien vs. Predator (2004) with the title but all the 'vs.' bit amounts to is a rubbish thirty second stand-off between the two titular beasts at the very end, boring as hell & surely a big disappointment to anyone hoping to have a full on monster mash. The character's are poor, the dialogue is awful, the pace is slow, the story is predictable & cliché ridden & the whole film just sucks really with a lazy script that states wrongly that both Komodo Dragon's & Cobra's are amphibious which they are not. Hell, . Cobra isn't even worth watching for any unintentional laughs since it's so dull & hardly anything ever happens although the sight of a woman hiding behind the smallest rock on the beach from the Cobra is quite funny for the wrong reasons.

How does Wynorski keep getting directing jobs? He is probably consistently the worst director currently working, how can he keep getting fun sounding films set on beautiful locations with half decent casts & still churn out such an awful film? I think this was cut to get a PG or for it's TV showing since every time someone swears it's masked by a Parrot squeak! There's zero gore or violence & the monster scenes are limp, people just sort of stand there, the monsters just sort of stands there too hissing or roaring & that's about it. The CGI computer effects are terrible, this is really poor stuff that just looks horrible.

With a supposed budget of about $450,000 this looks as cheap as it was, the Hawaiian locations are nice to look at but that's about it. The acting is poor from an uninterested looking cast.

. Cobra is an absolutely terrible Sci-Fi Channel 'Creature Feature' from Jim Wynorski, films don't get much worse than this.