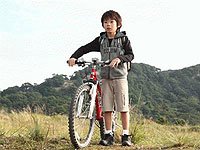 A boy dreams repeatedly of a beautiful woman by a lake in a Japan of the remote past; but after falling asleep under a legendary oak tree, he finds himself in the Tengoku period. He meets woman from his dreams, Princess Ren (Yui Aragaki), and a loyal samurai and childhood friend (Tsuyoshi Kusanagi) - and find themselves party to a battle so common in the period of warring states. What results is a story of love, war, and courage set spanning two time periods.

The tale is quite engaging, even if the time-shifting plot isn't particularly credible. But remember, this is a children's story - though there's enough acceptable period detail to appeal on the level of a parable. It's not particularly funny, aside from an unaffected humor, nor is it as thrilling as you might expect (despite some battle scenes). BALLAD has an appealing visual sense, with attractive photography and neat but rustic set decoration; the film has an unusually effective use of light and shadow. And once you're willing to forgive the inconsistencies of the time-shifting plot, the simple story is captivating enough. I was not as forgiving about the plot's time problems, as the boy goes from modern time to ancient Japan by conveniently falling asleep.

Review by poikkeus from the Internet Movie Database.