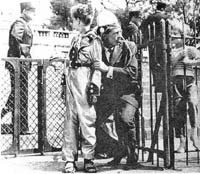 This film barely qualifies as Science-Fiction but it does succeed as wacky French comedy. Done on a very low budget, filming largely took place in the streets of Paris with the natural citizens of that city involuntarily playing "background extras" who occasionally looked straight at the camera. Even a shaky car chase scene seems to have been done "on the fly" without permits. All of these exposed seams actually add to the film's charms and give it a sense of immediacy. Prolific comic actor Darry Cowl does a sort of one-man show in his usual stuttering, panicky style. It was nice discovering a French comic talent as entertaining as Louis deFunes. After the stiff cornball opening pre-title sequence on a cheesy planet Mars, I expected to be irritated by the film but it ended up moving along so quickly, I had no time to be bored.

Review by FilmSocietyMtl from the Internet Movie Database.