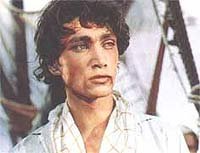 An unusual science fiction fantasy romance of a doomed love affair combined with a love triangle and a bit of clumsy anti-capitalist commentary, this film was a hit with Soviet audiences in the early 1960s on first release. It still looks good for its age half a century later: the very faux-Mexican setting looks quaintly historic as though the events of the film took place in a peri0d much earlier than 1962 when it was filmed. The cinematography is very good with a number of shots throughout the movie taken at unusual angles or from characters' points of view and there is an emphasis on displaying underwater scenes as bright-blue, beautiful and benign even when there is a shark lurking about. The young lead actors are stunning to look at and the camera often focuses on their beautiful features: even the villain is extraordinarily handsome in a moody way. The acting is at least natural if not particularly outstanding and even a bit wooden and amateurish.

All characters are very much stock stereotypes and the actors deviate little from those stereotypes. Medical scientist Dr Salvatore (Nikolai Simonov), the idealistic "mad scientist" of the piece, has a son who once suffered an incurable lung disease so the father implanted gills in the child's body somewhere to save his life. The boy Ichtyander, the "monster" naif, can breathe and live underwater as well as on land but the father keeps him isolated from other people as he has a vague plan for the boy to lead an oceanic republic free of class and other social divisions and exploitation. In the movie Ichtyander (Vladimir Korenev) is a teenager and he falls in love with a girl Gutiere (Anastasia Vertinskaya) after rescuing her from a shark attack; he desires to follow and be with her, and he leaves his water-world to go to the city where she lives. Unfortunately Gutiere's father, the pearl-diver Baltazar (Anatoly Smiranin), is heavily in debt and has promised the girl's hand in marriage to local rich playboy Pedro Zurita (Mikhail Kozakov) who has promised to pay the old man's debts.

The plot is a hodge-podge of action, romance and sci-fi fantasy; easy enough to follow but with gaping holes that make it shaky in parts. It seems over-eager to advance to the climax to the extent that characters must have in-built GPS systems in their brains to find significant people. The busy pace and the plot's complications don't permit much character development which is unfortunate because Ichtyander's infatuation with Gutiere leads him out of his isolation and his father's control and forces him to confront the best and worst of human behaviour and social interactions. Young viewers might identify with Ichtyander's confusion at adult ways of behaving and doing things. There's a point made about how money divides people into social classes and how society judges people on the basis of their wealth or poverty. By the end of the film Ichtyander still seems very child-like and his future without his father is uncertain. Other characters who also need to escape from their one-dimensional plane of existence include Gutiere, who could have railed against a system that forces her to marry because of economic necessity, and Baltazar, who is not shown in the movie to have a guilty conscience over horse-trading Gutiere: he must have had one though because he ends up saving Gutiere from a lifetime of misery with Pedro. A support character Olsen (Vladlen Davydov) is very under-used as a potential aid and mentor to Ichtyander.

Criticism of capitalism comes in the person of Pedro who desires to exploit Ichtyander's fishing and diving skills and tries to convince Dr Salvatore to mass-produce thousands of Ichtyanders for profit, demonstrating that the evil exploitive capitalist mindset is always on permanent autopilot in the brains of stock villains. By contrast, Dr Salvatore's desire for an egalitarian socialist underwater utopia is demonstrated as unrealistic in the context of an impoverished Latin American country where corruption, or what the viewer sees of it, is rife. Everyone in this country seems to be in debt and people constantly haggle for more money: Gutiere gives her necklace to Olsen so he can pawn it for money to keep his newspaper business going and Baltazar is desperate enough to sell off Gutiere to keep his pearl-diving business above water.

A highlight of the film is Andrei Petrov's musical soundtrack which includes the use of electronic instruments as well as conventional orchestral music and some Spanish-influenced flourishes. Dramatic sweeps of violins and other strings mix with beautiful bell-like tones and some odd, spacey tunes. A couple of songs appear early in the film as though the directors had ambitions for it to be a musical before realising the idea wouldn't mesh too well with a plot filled with twists.

A chase scene, a kidnap scene and an escape-from-jail scene complete with gunshots enliven the plot which concludes in freedom but not happiness ever after or a better understanding of the corrupt world around them for the young would-be lovers. Overall "Amphibian Man" is a visually striking film with beautifully shot locations that are picturesque and quaint, and which features good-looking young actors who run and swim around a lot. The premise and the plot are interesting though at times the directors seemed unsure whether they were making a musical, a comedy or an action film: the film dithers in one genre, then another before settling into the action genre. The film could have been much stronger with better characterisation and fewer twists in the plot.

Review by jennyhor2004 from the Internet Movie Database.