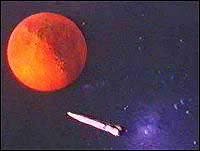 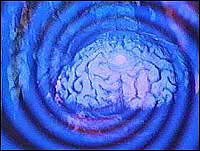 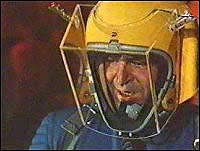 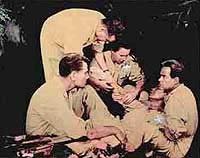 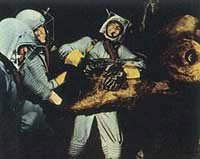 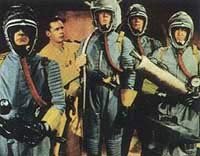 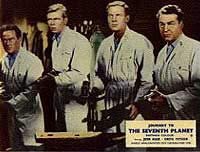 What irony: humans finally visit 'Anus, but instead of getting analy probed, they get their minds probed; not that there was much worth probing in the empty heads of the five astro-noughts. Of course, the whole mind-probe shtick was just an excuse to have the astro-noughts meet some girls on Uranus. In spite of realizing that the girls are mirages conceived to throw them off, the alien mind-game trick works EVERY time... All I can say is thank God that the likes of Neil Armstrong and Buzz Aldrin weren't sex-obsessed penis-thinkers, otherwise humanity would never have landed on the Moon -' because the astronauts would have been too busy masturbating to land properly.

"The year is 2001... All of Earth is under the control of the United Nations." Scary thought, huh? Fortunately, this little movie about the trip to Uranus had very little clairvoyant power.

I love how the astro-nils get their mission orders only once they're well away from Earth. Sort of like a long-distance runner being informed on the 11th kilometer that he will be doing a Marathon. Or a 17th-century explorer being told in the middle of the Pacific Ocean that his goal will be to find an island with large turtles. OK, maybe this 2nd analogy is a bit daft, but you must forgive me, for I have just sat through 70 minutes of pure B-movie cheese, and much like Agar I feel as if thoughts are starting to come rarely and with some difficulty.

Once the standard voice-over intro is over, the stereotypical sci-fi B-movie introduces us to the astronomically dumb astronauts -' and what an introduction it is: John Agar lets his fellow crew members know that he is extremely horny at all times -' which is when we find out that unquenched sexual appetite is the film's primary, main, and only theme. Never mind space-exploration, Agar's tiny mind is firmly under the control of Agar's throbbing penis, much as this sad future world is totally under the control of the vapid UN. To further confirm the viewer's suspicion that Agar is -' quite fittingly -' the dumbest crew member in a crew of ninnies, he actually uses the strange predicament they're in to get laid! His boss tells him that they're all hallucinating, that they're under the influence of an alien force, that the girls he meets aren't real - but does that throw Agar off? Of course not; he simply uses this new knowledgeability to materialize a former one-night stand for the ol' in-out. Apparently, in the far, far future in 2001 NASA prefers to hire astronauts who have the mind-set of 14 year-old teenage boys.

If it were up to Agar, the astro-noughts would have stayed in their green Uranal surroundings and spent the rest of their days having sex with the mirages of their choice. But as it is, Agar doesn't call the shots, perhaps partly because he is so stupid that he doesn't even cry for help straight away when being sucked in by "quick-snow". The Captain saves his life -' for whatever reason.

The second-dumbest astro-nil is the Irish sidekick who rushes to eat an alien apple, throwing all caution to the wind. Bacteria shmacteria! But it's easy to throw caution like that when a wind had previously blown away the entire brain out of his head. So heavily stereotyped is our token Irishman that it only takes minutes for the subject of leprechauns to come up. What's to say: it's a friggin' B-movie!

The Captain of the ship, while a little less childish than the others, is hardly an intellectual; after having faced the Cyclops dinosaur, he described it to the others as being "of the rodent family" which can mean one of two things: 1) either the species of rodent Cyclops had developed on Earth by the year 2001, or 2) the Captain has an F in Biology. (It's a coin toss!) Good thing he didn't comment on the plant-life too, otherwise we might have "learned" that the surrounding trees are all amphibian, or that the grass mates three times a year.

The Captain exhibits rather sad deductive skills, too, when he makes plans to foil the alien being that is mind-probing them -' while pathetically not realizing that the being must know the astro-noughts' intentions at all times. Stupidly, he goes to Ingrid, his Earth-love mirage, for consultation. Stupider yet, it works! She tells him all he wants to know. For some reason, the other mirage floozies aren't nearly as cooperative. Did the blob create Ingrid too perfectly?

The alien's strategy is so simple... yet so utterly retarded: let the Earthlings know what they want to know, and always inform them of your evil schemes in ADVANCE. The Uranal Uranusian has no feet to speak of, but he sure knows how to shoot himself in the foot. In the end, this incredibly powerful Cyclops blob that can terra-form with the flick of a wrist is unable to outwit and beat five incredibly dumb astro-zeros. So dim-witted is the Captain that he brings along the mirage of Ingrid, his wife or whoever, for the return voyage. What was he planning to do once he landed back on Earth? Introduce the mirage Ingrid to the real Ingrid? Have a ménage-a-ingrid-trois?

Even the title song will have you laughing, with its silly space sounds. If you're a fan of 60s space-cheese, as I am, you cannot miss this one. It doesn't raise the silliness bar, because many other flicks of this sort are even goofier, but at the very least it holds the bar on par with the other cheap-ass space turkeys of the Era.

Somebody here wrote that TJTTSP is impressive because it "predates SOLARIS by ten years". Never mind that "Solaris" was published a year before this turkey was made.