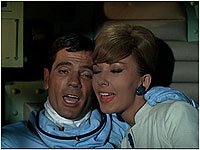 Back in the good ol' days of Disney Live action films (before the 1980's) Disney produced quite a few wholesome if not entertaining family films. Back then you didn't have to worry about dad sleeping with his kids tutor, or some wacky comic villain, hero, or sidekick getting hit in the nuts. There were hardly any poop jokes for kids to wet their paints laughing so hard. Sadly some smoked cigarettes, which is the greatest evil known to mankind next to the destruction of polar bears in the arctic due to global warming. Some even drank beer and perhaps ate some sweets like cookies. Sesame Street realized this evil and transformed Cookie Monster into the Vegetable Monster (I think) This brings us to my short but not fully formed review of Disney's 1962 comedy Sci-Fi film "Moon Pilot". It chronicles the space program sending a man to orbit the moon before such events have taken place. Some chick from an alien planet has come to help out the pilot so his brain doesn't become scrambled like the chimp they sent up before him. Disney had a lot of chimps and chumps in this film, and this monkey does a great acting job if a monkey ever did one.

There is the usual Disney army general yelling at the main bumbling astronaut played by Tom Tryon. You all know Tom Tryon form, you know, those films he was in. There is also a security chief yelling at him a lot. Wish I could help you in this review and tell you who they are, but unless you're a wiz at movie triv you might not know who they are if I told you.

Some interesting and harmless scenes with French actress Dany Saval. Capt. Richmond Talbot (Tom Tryon) teaches the chick from outer space who earthlings exchange affection. She is so fascinated by she just has to try it again and again. In her culture they bite each other on the ear. In her culture when they predict the future they can bring a living thought into reality for just a moment. Her prediction of the future provides a future for her and her hunky moon pilot.

This is a fun little entertaining comedy with some lite sci-fi touches. Overall there is nothing particularly memorable about the film, but could be fun for the kids and the Disney die hard fan. 'The Cat from Outer Space', is a better Disney Sci-Fi comedy but there are plenty of other great family comedies out there to see in general. Wouldn't own it in a collection but it might be worth a rental.

Review by fom4life from the Internet Movie Database.