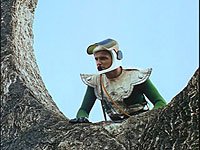 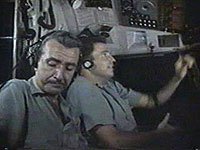 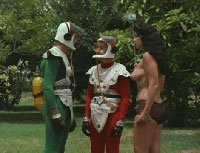 Recently, I've had the pleasure of viewing a true masterpiece of lunar (s)exploration with a friend of mine. (A female friend... damn your assumptions! #feminism)

I will not go into the fact I was able to predict the story 15 minutes into the movie - the protagonists flies to the moon, falls in love with a "moon doll", comes back to Earth, realises his secretary looks similar to the alien and gets together with her (because physical resemblance obviously suffices). I will also not go into the fact that the dialogue felt like a single pace dialogue between "Siri" and the Google assistant, because dialogue became irrelevant once they laid eyes on the anthropomorphic semi-naked aliens and was replaced by sporadic phrases like "Get a good shot of her!", "Take a picture again from a different angle!" and "We have a lot of useful data!". (I presume the last of these sentences was supposed to be followed by "... for a nude calendar!".) I could also talk about how the two token men and little children on the moon (the only fully naked individuals in the entire film) were probably placed there by the director(s) to hide the fact (s)he is making a soft porn movie. (Yes, a female (co-)director... damn your assumptions! #feminism). But I won't... just as I won't go into the fact the director invented all kinds of activities for these lunar beauties, so that their breasts could get a little more screen time.

Instead, I will talk about what I think really happened. Consider the following details: 1) The movie shows that the secretary of these two delusional entrepreneurs is madly in love with the ambitious protagonist, who unfortunately only has science on his mind (at least until he's on the moon and gets hit by gold fever and then gets hypnotised by the lunar ladies - something his colleague continuously tries to prevent by reminding him "Jeff! We are here #forScience!"). 2) All the "useful data" is lost as they leave the moon in a rush due to oxygen shortage (though they never truly inhaled anything from their oxygen tanks), i.e. the camera with nude pictures was left behind. Thus they were never able to prove that they were on the moon - not that pictures of topless ladies under Earth-species palm trees are much proof. 3) At the end, they point out that NASA investigated their space craft and don't believe it ever left Earth (or is even capable of it.) 4) Before the landing on the moon, they pass out, so they actually miss it.

There's one way we can make sense of all this. I believe they were never truly on the moon! The secretary faces two problems: She's not being noticed by her love, and there's a risk she may lose him in a failed rocket launch due to his delusions. So what can she do? Days before taking off to the moon, the secretary drugged the many mysterious liquids you see and hear bubbling away as the boys discuss most intriguing science (such as the spacecraft not being able to survive temperature fluctuations on the moon after actually having been in much colder space and on a hotter Earth). As they get into the useless piece of scrap metal, the drugs begin to work and they pass out. Time for the real "trip" to begin! They get out of the rocket and explore Miami. The environment is the exact same they saw when leaving Earth, but they believe it is the moon, pick up regular rocks and believe them to be gold. But now: Showtime! The secretary takes off her top and hires a few FKK enthusiasts (non-Germans: look it up!) to also play along. (You can tell they usually wear a bra because of conspicuous tan lines). She plays the mute queen of the moon and the drugged protagonist falls for it. She gives him everything he desires in a woman: Naked breasts and no talking! (#feminism) Once he decides he is absolutely in love, she makes them think they are running out of oxygen. They arrive back on Earth. He's love sick, sees her, pictures her as the naked mute queen and apparently thinks "That'll do". Her plan worked!

There are numerous other clues that support this story, such as the obviously fake and sloppy model of the Earth they see after the launch - no doubt it was placed there by the secretary.

Voila, mesdames et messieurs. curls beard. This is undoubtedly how it happened. It appears Hercule Poirot once again exercised his little grey cells to solve yet another complex mystery.

Review by Finngard Studios from the Internet Movie Database.