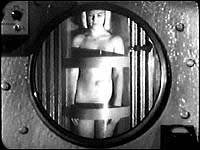 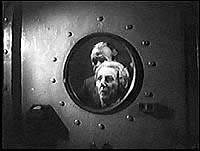 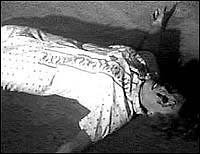 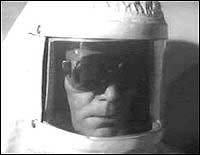 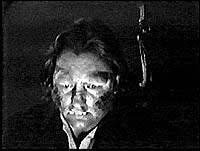 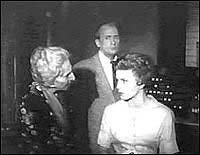 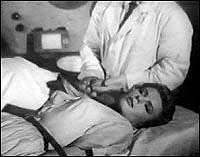 I always get a kick out of the nonsense that passes for scientific rationale in films like "The Atomic Brain". In the early going, we're introduced to Dr. Otto Frank who's experimenting with the transplantation of animal brains into human beings. He uses atomic fission in a cyclotron to stimulate brain cells. An early attempt has yielded a werewolf without hair, a savage looking man with a pair of large canines who grunts his way through the film. Now, going for the gusto, the good doctor is ready to try moving a brain from one human to another, courtesy of Hetty March's (Marjorie Eaton) financial backing. She's just imported three young women on the pretense of a job offer, and her interest lies in getting a makeover for her own brain, since she's already over the hill and about to keel over.

Anita Gonzalez is the first victim of the trio; she's just not pretty enough for Hetty, so she winds up with a cat's brain. Her feline instincts come through handily when it comes to catching and eating a mouse, but she doesn't exactly land on her feet when she falls from the roof of the house - yikes! Tall and buxom, Bea (Judy Bamber) from England looks like the best candidate for Hetty's brain, but she gets her eye clawed out by Anita in a cat fight. That leaves Nina (Erika Peters) from Austria, the only one of the three with enough sense to know that something's not right with this picture. She enlists the help of Hetty's sixty year old gigolo Victor (Frank Fowler) in an effort to escape, when it dawns on him with a stabbing sensation that once Hetty's young again, he'll have his marching papers.

You'll have a clue as to what the eventual outcome will be when it's revealed that Dr. Frank's cyclotron gizmo is wired to a nuclear device just in case the authorities come calling. Unfortunately though, before doc goes completely mad as a hatter, he has the foresight to switch Dame Hetty's brain into the carcass of Xerxes the cat (using his real name). There's no pussyfooting around with Hetty, she paws the detonation button to end this charade, the mansion and lab going out in a blaze of glory.

You can have some fun with "Monstrosity", just like the Mystery Science Theater folks have, but no one has yet been able to answer one question. During the entire time the three young women were still fresh and trying to figure out how to escape, why didn't they just head for the front door?