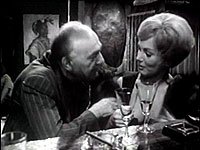 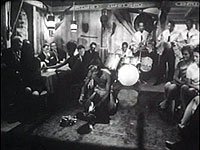 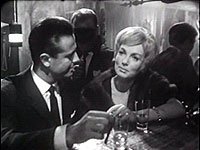 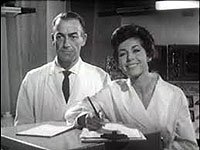 There's a Monty Python sketch called "The Adventures of Ralph Mellish", in which the mind-numbingly ordinary routine of a file clerk's morning commute is paired with feverishly dramatic narration and an ominous score. But the joke is that despite all the build-ups, nothing exciting happens to Mr. Mellish: By the side of the road, there's no dismembered trunk of a man in his late 50s... no head in a bag... nothing... ("not a sausage", as our wacky friends across the water put it).

It was a hilarious premise for a short comedy skit, but for this excruciatingly dreary 75-minute-long West German import (one hesitates to call it a "drama") it blows economy-size chunks.

Dr. Frank Overton and colleague Dr. Helen Wieland have just been awarded a prize for their successful experiments in suspended animation via cryogenic freezing, using chimps as subjects. They believe the process is ready to be tested on humans, but the higher-ups are reluctant.

Dr. Overton's wife Joan feels neglected because her husband's been working those long hours at the lab. The fact that he's spending them with hottie Dr. Helen (and that she can see Helen has a major crush on oblivious Dr. Frank) doesn't help, either.

So Joan has taken to drowning her sorrows in drink, while stepping out with her old flame, journalist Tony Stein. "Aha!" you say: "Jealous lover murders her in a fit of passion, then tries to pin it on the scientist." No such luck.

Joan finds an old Colt.45 pistol while drunkenly rummaging through a desk in Tony's flat. Tony tells her to leave it alone: it's an unregistered firearm. He could get in big trouble as well as embarrass his uncle (who's some kind of high muckity-muck in the department) if the police found out about it. When Tony -- who's just been given a tight deadline for an article -- finally gets fed up with her and kicks her out so he can get to work, Joan sneaks the pistol out in her handbag.

She then staggers over to the lab for a shrieking showdown with Helen (although she doesn't quite work herself up to pulling the gun on her rival). Frank manages to calm Joan down, and takes her home. When Helen -- in what's either a stunningly clueless or a nastily passive-aggressive move -- calls up Frank to reassure him that Joan's embarrassing scene is all forgotten now, Joan finds out who's on the phone and flies into another jealous, hysterical rage. She threatens to kill herself with Tony's pistol.

Over the phone, Helen hears Frank order his wife to give him the gun, then she hears a shot, and a scream. After a moment, Frank returns to the phone, tells Helen everything's OK now, and hangs up.

So did Joan really kill herself, or did Frank shoot her by accident (or accidentally on purpose) while trying to take the gun away? Will we wait til Act Three to find out what actually happened?

Not in this film, buster! We quickly learn that Joan's OK: Frank took the gun away from her, while she was still in shock over having just missed accidentally shooting herself. (She thought it wasn't loaded.)

Frank removes the ammo clip, sees it's empty, replaces it and tells Joan the gun's "safe" now. Oddly, Dr. Frank is familiar enough with semi-automatic pistols to know how to eject the clip, but he neglects to check if there's a bullet left in the chamber (there is) or even ensure that the safety's on (it isn't). After a tearful reconciliation with Joan, Frank decides to return to the lab and take the experiment to its final stage, by freezing himself for the weekend. He promises Joan that after he's revived, they'll go off on a second honeymoon.

Meanwhile, Tony's missed his pistol and comes looking for it, shortly after Frank leaves. Joan tells him their affair is over; she's going away with Frank. Then she finally manages to fatally shoot herself, once again by accident. (Ok, I'll admit that's tragic irony, in a sort of Darwin Award-ish way. Or maybe this was intended as slapstick humor, from the country which gave the world Dachau and Buchenwald.)

Tony panics and bugs out without notifying the police. Meanwhile, back at the lab, unsuspecting Frank has himself quick-frozen. (FOR SCIENCE!!!)

The next day, after the maid discovers Joan's body, the police show up at the lab with some very pressing questions. Especially after Helen reluctantly informs them of that incriminating little phone conversation with Frank.

So, is our hero going to escape once he's defrosted, and prove his innocence while eluding the police, a la "The Fugitive"?

Look, this film is only 75 minutes long, and the majority of these have already been chewed up by this irrepressibly drab and awful plot. While Frank's being revived, Tony's guilty conscience prompts him to call up the police and tell them the truth. So Frank's suspected of murder for considerably less than ten minutes of screen time, and cleared of it even before he's been thawed out.

Hitchcock could have learned a thing or two from this director.

There's a tiny morsel of something suspense-like embedded in the final moments of this dog, as Frank apparently got freezer burn (or something) and it takes a bit of a struggle to revive him. Unfortunately, by this point the viewer's interest is definitely DOA.

There. In just a few minutes (unless you're a very slow reader) I've saved you from a fate far worse: squandering an irreplaceable hour and fifteen minutes of your life on this anti-thriller.

Review by henri sauvage from the Internet Movie Database.