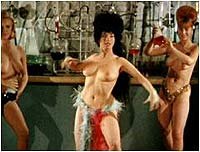 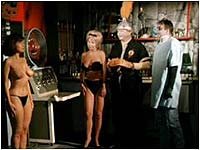 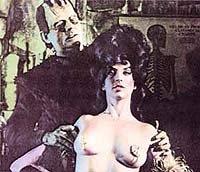 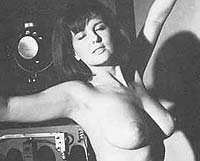 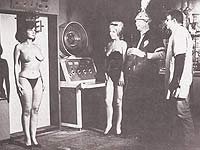 I've watched two nudie cuties in the last week. One of them was a tiki nudie by Barry Mahon called "Pagan Island". The film was dull and with very limited humor and camp value. The other one I watched was "Kiss Me Quick". If the filmmakers of the time had to do a nudie cutie, this was the way they should have done them, with bad (but still funny in a groan-worthy sort of way) jokes and plenty of naked women. Judging these films by any artistic merit would be pointless, as the sole purpose of them was to get as many naked women on screen as the courts would allow at the time. While not nearly as good as any of the early works of Russ Meyer, "Kiss Me Quick" is certainly an above-average example of the genre.

The "plot" (as if it mattered) involves the alien Sterilox, an asexual alien from the planet Buttless. This gives you an example of the humor caliber of the film. Anyhow, Sterilox's mission is to bring perfect females back to his home planet. He ends up in the lab of a mad scientist, who presents him with various choices. The mad scientist seems to want to create perfect female specimens through his sex machine. Due to legal restraints of the time, no sex is presented and the women merely strip for the camera.

Like many films of the type, the strip sequences themselves get pretty tiresome after a while. Despite an attractive cast, by today's standards these burlesque numbers are pretty unerotic. Like many nudies, its loaded with old vaudeville jokes. However, the jokes are actually funny and the comic timing is certainly good. The alien Sterilox is played by a chubby Stan Laurel impersonator, and he certainly does a good job in the role (the likeness is uncanny). The mad scientist Dr. Beedlove is a spoof on Dr. Strangelove, and the actor playing him does a very good job in the role. His makeup is on par with my elementary school Halloween costumes. Plus, there are plenty of other monsters, including a vampire, a mummy, and a brief appearance by the "Fannie Stein" monster (an apparent sex change operation).

Granted the film is sexist, but what would you expect? What feminist would watch this to begin with is beyond me. Despite the presence of naked women, the film maintains a charming innocence throughout. Maybe its because its such an outdated way to get nudity on screen without anything overtly explicit. The characters are certainly likable and the final resolution is hilarious.