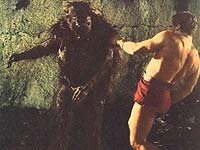 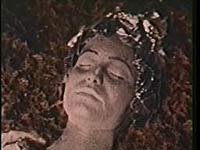 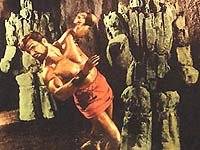 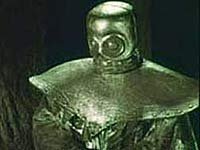 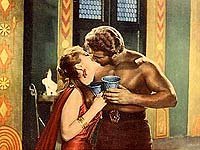 A delightful adventure romp which mixes in traditional mythology with some sci-fi themes but loses its way somewhat towards the ending. Probably the biggest problem is that it looks like the filming ran short of the expected running time and lots of stock footage and the infamous, interminable "sandstorm" scene was clumsily inserted to make the movie last longer. They succeeded but sitting through these sections is a real bore. Thankfully they are only part of the movie and the rest is a lot of fun to sit through.

The opening scene witnesses a miniature meteorite crashing into a mountain and causing chaos. Moving forward hundreds of years, we learn of a race of aliens living in the mountain who require sacrifices to stay alive. They also happen to be astrologers who predict a coming catastrophe through which they will inherit the earth and mankind will be wiped out. A local village is forced to supply sacrificial victims because evil queen Selena is in cahoots with the aliens and has been promised eternal life if she helps them. Luckily, an elder has called in hero Hercules to sort out the problem.

Here, Alan Steel enters the picture as Hercules. Steel was one of the many actors to star in these peplum movies but is one of the less well-known, as he only appeared in about half-a-dozen titles before going on to other things. Like Kirk Morris, Steel is a native Italian who seems to have been picked for the genre because of his uncanny resemblance to Steve Reeves! Certainly his acting skills aren't up to much (although that's not a necessity), but his hulking figure is just right for the genre. Thankfully, Steel has late genre veteran director Giacomo Gentilomo to direct him, and Gentilomo makes a good job of things; in particular the action scenes are well-choreographed and a lot of fun to watch.

As Hercules nears the village he is pounced on by a pack of men hungry for his blood. What a welcome! He quickly fights them off before meeting up with a village elder who wants him to lead a rebellion. They hide in secret underground tunnels but the old man is impaled by a wall of spikes in a hilarious scene! Hercules himself is thrown into a pit which rapidly fills with water, but manages to break out through sheer strength alone. Now, apparently at this point Hercules fights off a monster, a fight which is referenced a couple of times in other reviews and later in the film. For whatever reason this fight is missing in the Something Weird version I saw; this annoys me pretty much because I enjoy a good monster fight as much as the next person. Having defeated his enemy, Hercules proceeds to bend a few bars before rescuing an innocent prince from an assassination attempt. This prince figures predominantly in the movie but his role is unknown - he doesn't actually do anything useful, just keeps getting captured and needing to be rescued! The plot develops as this point, introducing a number of superfluous female characters who generally need rescuing and are impossibly busty to boot. Hercules fights off a load of guards before walking into a trap when a net is thrown over him. He's put in a closing-spike trap which is kind of like one of those jungle traps they had in those Italian cannibal films, except that it works a lot slower and is man-powered instead of automatic. After much straining and sweating, he escapes to win the heart of queen Selena.

Selena has obviously seen HERCULES UNCHAINED, so slips Hercules a drink containing a potion to make him love her. Luckily he's been forewarned of this so only pretends to drink it, and goes along with Selena for a time before escaping. At this point, a rebellion attacks the palace and all the remaining characters flee to the Mountain of Death, where the Moon Men are hiding. Then there's that dratted sandstorm, which goes on for an age, plus inserted weather footage of lightning and rough seas. Eventually Hercules fights off the rock-men who act as a guard, throws the Moon Man (yes, there was only one!) to his death and rescues everyone before destroying the mountain. In the end, he rides off into the sunset with his new girlfriend! My favourite parts of this movie were the ones involving the Mountain of Death and its inhabitants. The Moon Man is a tall, golden, scary-looking dude with a skull-mask and a bad temper. The rock-men are a hilarious bunch of shambling idiots who race around and crush people to death, that is before Hercules arrives and starts throwing them around like dolls! Also lurking in the background is an alien queen who is revived by drops of blood like Barbara Steele in BLACK Sunday. After the plan is foiled she rots away like all good movie vampires. The special effects are limited in this movie but plentiful and entertaining, with lots of explosions and roaring fire at the end. As I mentioned, the action is staged well and Hercules is given lots of fighting (of guards, monsters, traps, etc.) and heroic things to do (uprooting trees, pillars, etc.).

Anna Maria Polani is pretty good as the evil Selena, a totally ruthless and hateable character who has no redeeming qualities whatsoever - that's what I like in my villains! Jany Clair in comparison is rather insipid as Agar, a slave girl who falls in love with Hercules and runs around simpering after him. This movie contains music stolen from another peplum film, possibly MACISTE IN HELL, which is used in the opening credits. It's a fast-paced adventure which could have been one of the best, but is ruined by that pacing problem in the second half. Without the sandstorm it would have been a classic; with it, it's merely good, solid fun.