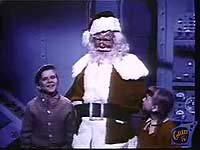 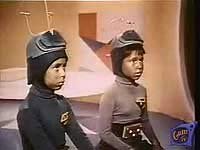 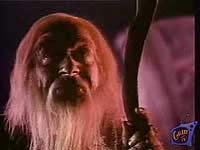 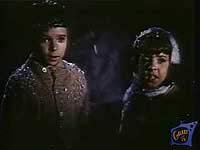 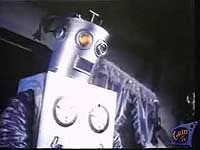 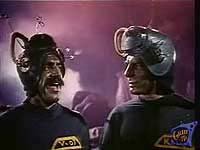 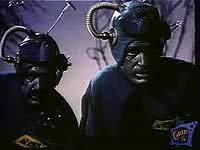 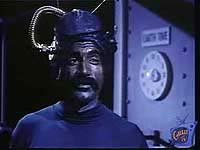 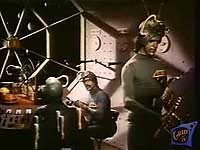 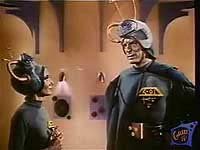 Many cult movies owe their newfound popularity to Mystery Science Theater 3000. It was a remarkable program, in that it dissected all of a film's shortcomings. They had a heyday with this one. Santa Claus Conquers the Martians fell into obscurity after its release until it was featured on the show. There are probably more holiday science fiction films out there, but if they are in anyway similar to this one, then I don't want to see them. The movie is a complete disaster in presentation, editing, acting, plot, and special effects. It even has an inappropriate title.

May I spoil the plot for you? I feel obligated since the title is misleading. Santa doesn't conquer the Martians. No one conquers anything. It's just a simple story of one planet's (Mars) desperate need of Christmas cheer. Martian ruler Kimar (get the joke) decides that his children, Bomar (isn't it funny) and Girmar (fake laughter) aren't acting like normal. They watch too many Earth TV shows and are despondent for no obvious reason. Somehow, Kimar is convinced by the planet elder that Santa Claus can make the children happy. So he and his trusty sidekicks Voldar and Dropo depart for Earth.

Once their tin can on a string, I mean spaceship, arrives on Earth, they kidnap two Earth children named Billy and Betty (where's Bertha?) to help them locate the real Santa Claus. The scene shifts to the North Pole which looks like a high school stage which paper snowflakes. Kimar and Voldar apprehend Santa and return to the ship. On board, Billy tampers with the craft's radar cloak which allows a US spaceship to "gain on (them)" but never actually catch them.

On Mars, Kimar builds Santa a toy factory operated by Dropo and the four children (who are the only kids in the whole movie). Voldar decides that Mars should return to its status as a warrior planet and vows to end Santa's reign of holiday camp. Thank God for that! Too bad he fails to notice that "Santa" is Dropo wearing a suit and mistakenly tries to negotiate with Kimar who arrests him. Santa then suggests that Dropo take his place as "Martian Santa" so he can return to Earth with Billy and Betty.

There is a lot more fiction than science in this so-called science fiction piece. How can both the Martians and Earthlings not need space suits while traveling on each other's planets? How can Earth children magically acquire winter clothing when they reach the North Pole? I'm glad they do since the film indicates that temperatures are -91° Fahrenheit there. The entire movie also takes place from early December until Christmas Eve which is enough time for a round trip between planets. Why doesn't anyone notice the UFO when it lands in Billy and Betty's suburb? The gaps in logic aren't nearly as poor as the acting. None of the child actors possesses the ability to add intonation to his or her voice. All lines are flat and monotone. Oddly enough, most of the adults overact worse than Jack Nicholson ever did. Dropo is worst of all. He constant spews ridiculously corny jokes in such an over-the-top matter that Bill McCutcheon knew how lame they were when he performed them. "What's green and roasts over a fire? A Martian-mellow!" is one such joke.

I also noticed a slightly political twist to this movie. Martian children aren't as happy as Earth children because they are "fed information from birth by a machine attached to their heads" (actual dialog). Little Earthlings get to frolic and play without a brain machine in sight. A newsperson notes that the Martian spaceship isn't a Soviet Union product. Why was that line included, I wonder? Draw the obvious allegories and you'll notice the subversive effect this movie could have on its intended child audience. This film was released in 1964, right after the Cuban Missile Crisis, so I'm not surprised that it has this message. Nevertheless, I find directing propaganda towards children particularly distasteful. Had the USSR not been directly referenced, I wouldn't condemn the film but that reference firmly establishes its intent.

This movie was recently placed in public domain and is available on Netflix for instant download. In the pantheon of crappy Christmas movies, this film is one of the worst. I'd recommend the MST3000 version more than the real one. It highlights the errors more thoroughly than I can here. I don't recommend movies for camp alone, so I advise you to watch another bad Christmas movie.

Review by doctorsmoothlove from the Internet Movie Database.