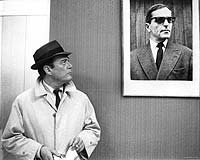 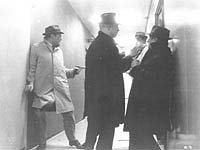 In Alphaville, French New Wave 'auteur' Jean-Luc Godard visits a bleak, dreary totalitarian world with journalist Lemmy Caution. Lemmy has arrived from the Outlands, and he must first register with an agency as a temporary visitor. Alphaville resembles any city in the Soviet bloc except that it is run by an AI-equipped supercomputer. This unit-'gently termed Alpha 60-'evokes for me sci-fi classic "2001: A Space Odyssey." It can talk, communicate, and seemingly understand the thought processes of its subjects.

In the first scene, women in a hotel lobby bore their eyes into Lemmy like robots. One escort who accompanies Lemmy to his room proceeds to disrobe and offer herself to him. He asks, "Are you drugged?" She replies, "It's normal, sir." The collective hallucination of Alphaville citizens is a byproduct of Alpha 60's clenched fist approach to governing. He computes the actions and reactions of Alphaville's citizens. His voice-'one of the better aspects of the film, if not a bit chilling at first-'is that of Big Brother: harsh, grating computer-speak intonation. The distortion in his voice mirrors the distorted world that Lemmy has suddenly found himself in. What is Alpha 60? We have occasional snippets of electric substations in the middle of nowhere. Through these 1.6 billion nerve centers that function as Alpha 60's brain, Alpha 60 issues directives and maintains control (without forgetting the anti-industrialist tendencies of Godard).

The plot revolves around interactions between Natacha von Braun and Lemmy. Across the city, "les grandes fetes" (Grand Festivals) are happening. After meeting in the hotel, Lemmy, it seems, wants to have an affair with Natacha. After Natacha admits she doesn't have the concept of love ("In love, what's that?"), the two take a taxi. For the first time, we see a New Wave technique-'man and woman have an existential conversation about love while driving through big, dark city. She is worse than frigid: she doesn't have a concept of sex or intimacy. We learn that she was raised her whole life in this dystopia, though her father lived in a time before Alpha 60. This film is about imagination. Godard has dreamed up a totalitarian world in which characters lack imagination. A world devoid of actors or novelists. Godard then guides us to imagine what would happen when their fragile world falls apart.

Over the course of their adventures, Lemmy becomes obsessed by the idea of destroying Alpha 60. Alpha 60 interrogates Lemmy, trying to understand his motives. What does Lemmy love? Gold and women. Throughout the terse, choppy dialogue, we see neon tubes that spell out e = mc^2. Science has become the religion in Alphaville.

The film's strengths include the references of Soviet-era architecture and particular flavor of communism. One scene that is disgusting yet beautiful depicts an execution set in an Olympic-sized swimming pool. Men are lined up against one wall, guilty for acting in an "illogical" fashion. One by one, they are called to stand at the edge of the diving board. They issue final, terse declarations before being shot by a firing squad. As the victims sink to the bottom of a pool, women dive in one after the other, swim to the corpse, and stab it with their knives. They then return to their diving boards and restart, all with blank faces.

This film is designed to shock us and yet inspire us at the same time. We learn to resent the heavy handed control and absolute logic of Alpha 60, and we cheer for Natacha at the end when she breaks free of Alpha 60's control as all other beings malfunction, wander aimlessly, and claw at the wall. Godard is at his peak as a creative 'auteur' here, and his debut in the dystopia-film genre isn't to go unnoticed. While not a pure New Wave film in the traditional sense, this film is experimental without seeming too forced.

Review by Merodoc from the Internet Movie Database.