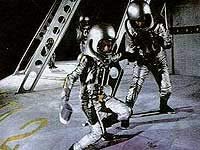 Antonio Margheriti's second entry in the GAMMA ONE QUADROLIGY series of Italian Spaghetti Science Fiction movies is a marvel of form over substance. I love the ultra low budget production design, at times histrionic or wooden acting, the funky 1960s color schemes, and the brooding, mind-boggling sense of pending cosmic doom that infuses nearly every minute of the production. It is almost a perfect translation of the Spaghetti Western to SciFi terms: A good looking film composed of individual moments, some of which are actually quite evocative.

The story is a different matter. I have absolutely no idea what is going on here in terms of the specifics, but as far as the broader premise I will hazard to try: Mankind is threatened by disembodied phantom beings from another galaxy who want to inhabit the bodies of "perfect specimens" of humanity in an ongoing effort to dominate the cosmos. United Democracies space soldiers Tony Russell, Franco Nero and good old Enzo Fiermonte do battle with them on an abandoned space station invaded by the Diafanoids during a New Year's eve celebration.

It gets a bit too much to keep track of, which is also a quality shared by Spaghetti Westerns, and if Margheriti & his scriptwriters can be faulted for anything it is perhaps being more ambitious with their plotting than their production is capable of fulfilling. Contemporary viewers without a background in ultra low budget genre films will probably be annoyed by the miniature work with models in particular, which are more complicated but not much more advanced in their execution than what is seen in Margheriti's first two SciFi movies, 1960's ASSIGNMENT: OUTER SPACE and 1961's BATTLE OF THE WORLDS. The spacewalk scenes are also somewhat limited in their effectiveness by their depiction in the form of actors in wire harnesses being swung back & forth on a sound stage by off-camera technicians.

Considerations like those weren't important to Margheriti, however, who simultaneously made four films that together amount to far more than the sum of their parts. 1964 was actually a remarkable year for Margheriti, who made no less than eight movies including his undisputed masterpiece CASTLE OF BLOOD (DANSE MACABRE) and the Peplum classic GIANTS OF ROME in addition to the four Gamma One films. However he found the energy he had the verve to extend himself and take chances, creating a diverse body of work in only 12 months that put him at the forefront of the emerging Italian B movie circuit.

Mario Bava may have been more of a visionary director (and his 1965 film PLANET OF THE VAMPIRES remains the single most impressive bit of Italian science fiction from the period) but Margheriti was a craftsman who was able to churn out product that pleased audiences in abundance. Perhaps it can be stated that where Bava was the more consummate artiste, Margheriti ran a production line studio which went for a bulk-rate approach. Instead of making just one movie with careful didactic attention he made four that together have more imagination, guile and sheer celebration of the act of making movies than all of the 3 contemporary Star Wars movies films put together.