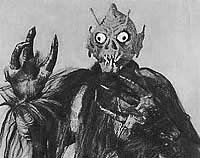 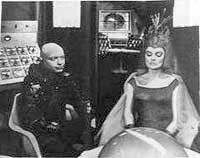 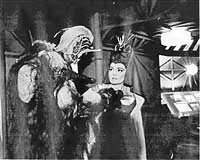 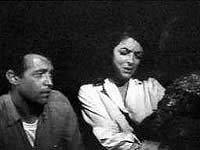 The film involves a mission to Mars scheduled to be manned by a single crewmember, Capt. Frank Saunders. Like many a low-budget sci-fi film, NASA is run by two or three people at the most. In NASA's headquarters, which bears a striking resemblance to any given high school with a "John F. Kennedy Space Center" banner drapped over the entrance, Frank is unveiled in a press conference the day before the historic mission to no less than three, semi-attentive reporters. In the middle of the conference, Frank completely freezes, and is rushed off by two scientists. The reporters are curious, but quick thinking General Bowers offers them drinks, and their desire for a good story is outweighed by the urge to get some free booze.

It turns out that our boy Frank is really a half-man robot (pronounced "robut" by his creator, Adam Steel), a sort of modern Frankenstein, if you will. Despite the fact that Frank has malfunctioned and become completely unresponsive two minutes into his unveiling at a press conference, he is sent out into space the next day as planned after some mild tweaking.

Meanwhile, a malicious, insipid race of aliens is coming to Earth for a single purpose. It seems their planet has been destroyed by a nuclear holocaust, and these saps are the lone survivors. The aliens are led by, Princess Marcuzan (who, you would think would be queen now) and Dr. Nadir, who informs the crew: "We are extinct as a race, unless of course we can find some good breeding stock to repopulate the planet." Wow.

The aliens mistake Frank's spaceship for an attack, and blow it up. Frank crashes somewhere in Puerto Rico, where he emerges damaged and begins to wander the countryside attacking random people. (Incidentally, Frank at no point resembles a classic Frankenstein or the guy on the cover of the DVD -' he looks more like a bargain-basement version of Batman villain Two-Face than anything else.) The aliens also land in Puerto Rico, and start capturing girls that don't look Puerto Rican in the slightest.

The film's idea of incorporating a Puerto Rican into the story comes when hero-scientist Adam Steel (love that name!) needs to make a phone call and struggles to communicate with a native. "Telephone?" Steel says, and the native is confused. Steel puts his hand to his ear in traditional phone-mime and says, "El telephono?" and the guy understands. Yikes. I'm one of the whitest white people alive and I'M offended.

Fortunately for our evil alien friends, all the Earth girls are remarkably easy to capture, and beyond shrieking periodically they provide no resistance whatsoever. The first girl is caught while on a beach in a bikini, sees her boyfriend edited out of the movie before her eyes (I think it was implied that he was blown up via ray gun), and once on the ship is totally compliant and mute. She doesn't even get cheesy lines like, "Gee! Are you from outer space?" Instead, she just kind of stands there and does as she's told as the Princess and Dr. Nadir leer at her in creepy, exploitation movie fashion.

It goes without saying that the aliens have themselves a monster locked up in a cage, which looks like a Mexican wrestler in an ornate costume.

Naturally Steel and Karen find Frank in some isolated cave and calm him down a little, leading us to assume that his killing spree is over and he's somehow "good" again.

Steel sends Karen off to get help, but she is nabbed by those pesky aliens and taken to their spaceship. Speaking of the spaceship, it's one of those cases where the exterior makes the ship appear no bigger than a one bedroom efficiency, but the interior seems to have endless room for cockpits, hallways, and holding cells. Then again, we're talking about Frankenstein Meets the Spacemonster, so who am I to complain about such technicalities? The pulse-pounding chuckle-inducing conclusion sees Frank freeing the Earth girls and Karen, and fighting the spacemonster. This is where the title feels like false advertising, because Frank and the spacemonster do not meet, per se, as the title promises; they just start fighting. What a rip-off! One can only imagine the stimulating conversations these two might have, but instead they do some lackluster fighting that would have benefited from REAL Mexican wrestlers in those costumes. Frank finally gets a ray gun and starts firing randomly, until he blows up the whole idiotic alien race in what is intended to be a self-sacrificial moment.

The special effects are pretty hideous even by B-movie standards. I know they had no budget, but the spaceship in flight appears to resemble a Christmas ornament leaking gas. The director intersplices stock footage of the military liberally, which only makes his sets and actors look all the more fake. To really put things in perspective, Frankenstein Meets the Spacemonster was released in 1965. Four years later, Stanley Kubrick's epic 2001: A Space Odyssey was made, with special effects that hold up better than the "state of the art" digital effects in Star Wars: The Phantom Menace.

This cheap, exploitative schlockfest actually tries to deliver an anti-nuclear war message, a la a genuinely excellent science fiction classic The Day The Earth Stood Still (1951). Sadly, such attempts are thwarted by the fact it is a dim-witted movie titled Frankenstein Meets the Spacemonster. If you are a Mystery Science Theater 3000 fan (like me), or if you enjoyed Ed Wood's Plan 9 From Outer Space (like me), you need to see this movie. For the rest of you: Stay very, very far away.

Review by Daniel Roos from the Internet Movie Database.