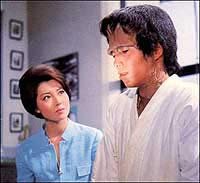 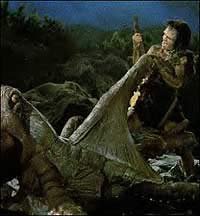 Kaiju films have never been revered for their subtlety, and in a film that has Nazis capturing Frankenstein's "immortal" heart which leads to a homeless boy in Japan transforming into a less green version of Bruce Banner, subtlety should be the last thing on the menu. Yet "Frankenstein Conquers the World" never lives up its zany premise, and certainly not the title. Maybe I should rephrase; I actually sound like I was expecting a 60s Toho monster film to bowl me over.

The thing is, for about fifty minutes this film concerns itself with a group of scientists, led by the dashing American Dr Bowen, trying to capture their escaped specimen. This means for much of its running time the film is more like a prototype Honey I Blew Up The Kid rather than any insane monster action picture. It's not until Kaiju films' answer to Benny Hill - Baragon - turns up (for no reason whatsoever), that the film breaks out the endearing rubber suits and model tanks. This is too little too late however; and the decision to confine the action to a forest means there is little to no building crunching action (apart from a particularly amusing scene where Frankenstein tries to kill a bird with a tree. Yes, a tree.)

Toho's productions of this era usually have a certain camp charm which renders terrible production as a minor concern; but even in terms of camp this one falls pretty short when compared to real classics like the 74 version of Mechagodzilla. The insane concept of the film should mean it stands out from the Kaiju crowd, for better or worse; but this one sinks right in.

Review by wierzbowskisteedman from the Internet Movie Database.