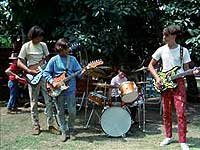 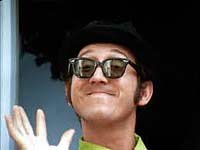 This is a very bad film, though as far as bad movies go, there are still worse--though not much worse! The Lemon Grove Kids film is definitely one of the most amateurish and dopey films I have ever seen and it looks like a home movie, though because it doesn't take itself too seriously, I couldn't completely hate it.

The Kids are a very bad knockoff of the Bowery Boys--though it begs you to wonder why anyone would want to do this in the first place?! One of the "actors" is Cash Flagg as a Huntz Hall-like idiot. According to Flagg's impersonation, all you need to do is wear a baseball cap, make stupid faces and walk around like an idiot. The film's knockoff of Leo Gorcy wasn't much better. Like some of the silliest Bowery Boys films, this one has monsters, a rival gang, etc. but is squarely placed in the 1960s with the music and fashions.

The bottom line is that with terrible music, rotten dubbing, horribly exaggerated action and slapstick sound effects, this film is a dud on every level and would probably appeal only to small children and bad movie fans. All others approach at your own risk.

FYI--Cash Flagg is the stage name for Ray Dennis Steckler. He also appeared in such great films as "The Incredibly Strange Creatures Who Stopped Living and Became Mixed-Up Zombies!!?" and was equally pitiful there. Also, there is a homage to the previous film RAT PFINK A BOO BOO--look for it after the gorilla appears.