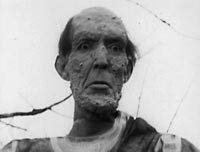 Never have I seen a movie with less respect for logic, or its audience, than Monster A Go-Go. This is below the level of a first grader. This movie does not have continuity problems, it is one. The ending is one that no viewer would guess, because no sane person would use it.

The plot, such as it is, involves an astronaut who went up to space and came back as a hideous ten foot tall monster. Pretty standard stuff. Several other low-budget quickies were made on basically the same premise. What sets this apart is the sheer confusion and disregard for any sense of continuity that the already thin material is handled with. People do things that no rational person would ever do. Revelations are made that... But let me back up a moment. Before I go on about all the things wrong with this movie (which is everything) allow me to explain the tortured route Monster A Go-Go took to reach theaters. In 1961, Bill Rebane started this film, hoping to make a quick buck in the drive-in circuit. But halfway through filming it, he ran out of money, and the project was canceled.

Four years later a young director named Hershel Gordon Lewis (who would later produce tasteless splatter-fests such as Two Thousand Maniacs and The Gore-Gore Girls) needed something to show on a double bill with his own film, Moonshine Mountain. Most Z-grade filmmakers would simply buy the rights to a preexisting movie and show it under a new title. But that would have been too easy for Lewis. Instead, he chose to finish what Rebane had started.

Of course having a four year gap in the production schedule creates all kinds of problems. Many of the original actors were unavailable, and one actor looked so different after an accident that he now played the brother of the character he played before. Also, Lewis had even less money than the previous filmmaker, so he was reduced to shortcuts such as having the scientists talk about important plot points rather than showing them on screen.

Now that you know what went into making this turkey, you probably have pretty low expectations. Prepare to set them much, much lower as I explain some of the plot points. First off, what turned our brave astronaut into a not-very-scary monster? The flight doctor switched him to a new, untested form of 'radiation repellent'- and doubled the dosage- just before liftoff, despite disastrous results in animal testing. Why? Because it seemed like a good idea at the time. This explanation comes up a lot.

For instance, at one point it is revealed that one of the scientists captured the monster, locked him in a closet, and began giving him doses of antidote over several weeks- without telling anyone! And the only reason he tells anyone now is that the monster escaped and trashed their labs. So while they've been searching frantically for the monster, it's been in their building- but now it's out wreaking havoc again.

The production values also match the budget. The special effects are non-existent. Many of the props look like something a third-grade art class would make, while others are clearly everyday object gimmicked up to look like scientific instruments. All shooting was apparently done in Podunk Iowa, judging by the number of empty fields and overgrown thickets. I have not named any of the actors, both as a courtesy to them, and because they're no one you would have heard of anyway.

But nothing can compare to the sheer idiocy of the ending. Read no further if you still want it to be a surprise. Hershel Gordon Lewis must have been at a complete loss for how to end this- or loaded out of his mind- because after the scientists and the army corner the monster in a storm drain, they receive a letter stating that the astronaut landed safely hundreds of miles away, and is on his way home. The narrator goes on to tell us that there was no monster. To quote directly from the film's closing narration; "There was no giant, no monster, no thing called "Douglas" to be followed. There was nothing in the tunnel but the puzzled men of courage, who suddenly found themselves alone with shadows and darkness! With the telegram, one cloud lifts, and another descends. Astronaut Frank Douglas, rescued, alive, well, and of normal size, some eight thousand miles away in a lifeboat, with no memory of where he has been, or how he was separated from his capsule! Then who, or what, has landed here? Is it here yet? Or has the cosmic switch been pulled? Case in point: The line between science fiction and science fact is microscopically thin! You have witnessed the line being shaved even thinner! But is the menace with us? Or is the monster gone?" What the Hell?! We've seen the monster. He's killed three people! And now they're telling us he was just a figment of our imagination! How on earth could Lewis think that anyone would believe this for even a moment? A glue sniffing kindergarten dropout could see through this! In my mind's eye I can almost see the audience going into a stunned silence, then breaking out into a chorus of boos and throwing their popcorn and drink containers at the screen. I would be afraid to show Monster A Go-Go in my theater for fear that young moviegoers would forcibly recover their dimes and quarters from the cash register.

So under no circumstances should you watch the original version of this movie. The Mystery Science Theatre 3000 cut is watchable, but even Joel and the 'bots were hard pressed to do much with this material, even breaking down crying at the end because it was so bad. Come to think of it, maybe the CIA should screen this one down at Guantanamo.