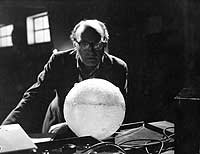 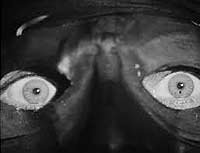 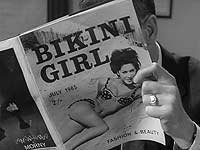 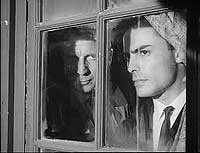 Made at Shepperton Studios in England, this very talky black-and-white sci-fi horror effort (originally released to US theaters as BLOOD BEAST FROM OUTER SPACE) seems at times like two different films combined together, but is a passable time killer nonetheless. The agreeable trio of good-looking, middle-aged scientist Jack Costain (John Saxon), bespeckled, head-scratching vet Dr. Morley (Maurice Denham) and analysis expert Ann Barlow (Patricia Haines) pick up something big and weird and "invisible to the naked eye" on the radar... and it's heading straight for greater London! Initially assuming "it" is a twenty-foot meteor, they (and the military) track it down to a rural area and discover only a small white sphere where they expected to find a giant crater. Research into the mysterious ball discovers it is made from an undetermined silicone material, has a temperature of 25 degrees below zero and it didn't actually fall to Earth, but was somehow guided there.

Spending a late night at the lab alone doing a report, Ann suddenly comes down with a headache, blurred vision and profuse sweating, hears heavy breathing coming from the room containing the (now-glowing) sphere and barely escapes with her life when a scaly, rubbery-looking monster claw reaches out and grabs her. She makes it to the alarm, but the military men who come to her air find nothing. The army major (John Carson) naturally scoffs at Ann's claim (saying it is a practical joke), but Jack discovers mud in the lab and a monstrous footprint outside that backs up her claim. So Morley decides to go in alone with the sphere; hooked up to a microphone to call in his co-workers to help in case things get out of hand. He suffers the same physical pains Ann did the night before and encounters the same creature (which is blurred out), but he ends up dying of fright (or, keeling over with a heart attack; it's hard to tell). The sphere (which is actually a portal for matter to be transferred from place to place) disappears into thin air and the evil alien then escapes, steals a car and escapes the military base, running over and killing the major in the process.

Three weeks later, over twenty young women have mysteriously disappeared and Scotland Yard (led by Alfred Burke as Det. Hartley) is investigating. It turns out that the alien, named Medra (Robert Crewdson) has set up a bogus modeling agency called Orion Enterprises and is luring ladies there with an ad placed in 'Bikini Girl' magazine. Medra (who now has something of a personality) is tall (6'5"), speaks with a cultured-sounding British voice, disguises himself with a black mask with the eyes cut out and leather gloves and is usually seen only in shadow. The women he calls in to his office are hypnotized with a light and sent back through the portal to his home planet Ganymede (the third moon of Jupiter), where they are used to help repopulate (and help phase out their more inhuman aesthetic qualities!). Haines and Saxon also return to aid the police; she in an ill-fated attempt to go undercover to catch the creature and he to listen to the alien's snooty final commentary ("We from Ganymede knew that we were superior beings and had nothing to learn from you!") before it blazes back to his home planet.

Aubrey Morris (THE WICKER MAN) livens things up briefly as a creepy, grinning, effete bookstore owner where the alien retrieves his mail. He makes some hilarious facial expressions while eying Det. Hartley, says "I like men with nice eyes, don't you?," and blown him a kiss as he exits the store! There are some minor attempts at comedy, involving a pair of goofy soldiers and Marianne Stone (who has a flashback) and Warren Mitchell as the bickering parents of a missing girl. Also in the cast is 'guest star' Jack Watson as Sergeant Hawkes.

When compared to some of the more visionary, intelligent and thought-provoking science fiction films and TV shows coming out of England at the time (Quatermass, Doctor Who, etc.), this seems pretty minor and forgettable, not to mention talky and slow-moving. However, it is still an entertaining film, with some care and imagination put into the storyline, plausible dialog (Jim O'Connolly scripted from the novel by Frank Crisp), OK special effects and good acting. The appearance of the alien, when finally fully revealed at the very end, is something of a surprise; a good or bad one, depending on the viewer.

The version I saw opens with a copy of the British Board of Censors certificate ('This is to certify that 'The Night Caller' has been passed for exhibition when no child under 16 is present") giving it an "X" rating. And don't forget the theme song performed by some unknown chap named Mark Richardson, which is a laugh riot. It (sung with hilarious deep, dramatic vocals) goes "The Night Caller has a hypnotizing spell... Those who fight it never live to tell..." The Image DVD is a pristine, very good-looking print, but the only extras on the disc are scene selection and filmographies for Gilling and Saxon. Originally released to American theaters as BLOOD BEAST FROM OUTER SPACE.