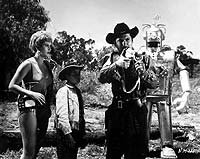 EL PLANETA DE LAS MUJERES INVASORAS (1967) In the same year so the ship and sets didn't go to waste, Mr Crevenna sent the crew to the planet of the 'eternal shining sun'. Such creativity! You had to wear glasses in there and all the inhabitants were women. They had kidnapped some earthlings and now they had to be rescued. Lorena Velazquez was both the evil and the good witch, I mean, queen. The cutest girls (Elizabeth Campbell, Maura Monti), were sent to earth to get more information and the less cute ones (Monica Miguel, Lucia Guilmain), stayed serving the queen. What these women wanted from us were our lungs, so they could go everywhere where they could breath oxygen.

You're not going to believe this, but the ship the women use to take hostages to their planet is one from a State Fair, since people were already in it. I guess that toy ship could stand the hardship of space travel and everything! Don't miss LA NAVE DE LOS MONSTRUOS (from Rogelio A.

Review by pv61 from the Internet Movie Database.