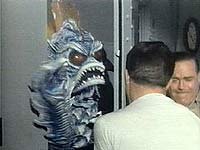 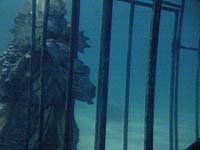 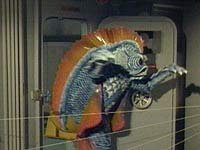 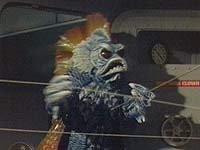 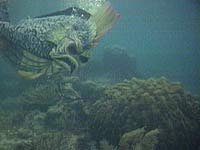 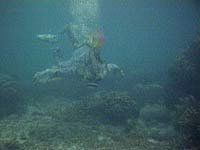 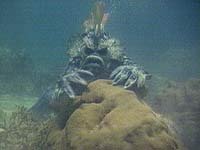 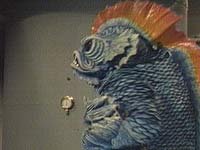 This is a fun film with genuine thrills to offer. We have a range of stock characters, acted out professionally by a cast battling with the pitfalls of low-production values, working through a simple yet imaginatively dealt with plot, and a monster that gets a lot of screen-time- and deservedly so.

The music, composed by veteran composer Paul Dunlap, serves up an aquatic creepiness as well as an effective aid to the shock moments in the film. It is an original and memorable score that has since been echoed in later films.

An amphibious monster terrorises the crew of a submerged marine research base. It was clearly inspired by Millicent Patrick's design for the Creature in "The Creature From The Black Lagoon" (Jack Arnold, 1954), but with more ferocious features and a determination for cold blooded murder as opposed to love and self-defence. With regards the monster suit the attention to detail is astounding and almost unbelievable considering some of the models and sets and Ron Burke plays the creature well.

The cast of this film do very well considering the dysfunctional props and aforementioned low production values all round. Scott Brady and Gary Merrill deliver every line with the gusto expected from an old horror and Sheree North plays an able and confident member of the crew. The supporting performances from Mike Road, Wende Wagner and John Howard (to name a few) are ably done and James Hong has an early role as the chef -' watch Deep Blue Sea (Renny Harlin, 1999) and compare LL Cool J and his parrot to him.

This film is compared -' often unfavourably- with Howard Hawks' The Thing From Another World (1951) but I would argue that Destination Inner Space is a far more entertaining feature despite its flaws. Lyon's film is ridden with hilarious onset problems that are made entertaining by the cast's refusal to acknowledge any of them, such as Scott Brady's first attempt at getting into his diving gear. These little problems, in my opinion, make the film endearing.

It was fashionable in the late 80's to work on underwater films. The figurehead of these films was James Cameron's "The Abyss" (1989); others include "Leviathan" (George P Cosmatos, 1989), "Deepstar Six" (Sean S Cunningham, 1989), Lords of the Deep (Mary Ann Fisher, 1989) and The Rift (Juan Piquer Simon, 1990), as well as later films such as Creatures From The Abyss (Al Passeri, 1994), Proteus (Bob Keen, 1995) and Deep Blue See (Renny Harlin, 1999). Destination Inner Space is, to my knowledge, the earliest horror film to take place in the desolate surroundings of the deep sea, particularly with a scientificmilitary theme and I would argue that there are elements of this film in the later films.

I thoroughly enjoyed what I thought would be a cringe-worthy low budget 60's cheese-fest and came to the conclusion that it is a very entertaining film that harks back to the black and white horrors of the 1950's. It's a shame that this film had such a small budget in a way as it could have been a big success.

Well worth a watch and I think in need of a clean-up and subsequent blu-ray release.

Review by jefuab from the Internet Movie Database.