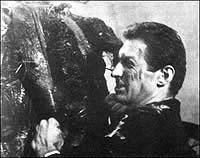 the Night Monsters starts in Antartica where scientists have found frozen planet & animal specimens buried deep under the icy surface, they are packed up & sent by plane to Gow island where the plane is due to refuel & drop the specimens off at a military research base. However while making the approach to land something happens on the plane, all communication is severed & the plane crash lands on the island. A rescue is sent straight away but only the pilot is found & in a state of extreme trauma unable to speak, the race is now on to find out what happened on the plane, why it crash landed & where the other nine crew disappeared to. The plane is unload & the specimens are taken to the base where Dr. Arthur Beecham (Walter Sande) gets to work, it's not long before worrying incidents begin to happen as a corrosive substance turns up everywhere, people start going missing & mutilated bodies are found in the jungle. It seems that killer Tree's are loose on the island & looking to feed...

Co-written & directed by Michael A. Hoey who apparently had major disagreements with the producer during filming & as such John Hall & Arthur C. Pierce were hired to shoot scenes that Hoey refused to including some of the more comedic moments & some of the terrible looking scenes featuring the Tree monsters. I quite like 50's & 60's sci-fi horror monster films generally but . the Night Monsters is pretty hard to sit through let alone recommend. The script was based on the novel 'The Monster from Earth's End' by Murray Leinster which I have not read so cannot compare the two but I suspect it's better than what ended up on screen, even at a fairly brisk 84 minutes long this thing drags badly in places & is very talky with lots of dull exposition that has dated very badly. The character's are clichéd, the dialogue is wooden, everyone is so impassive & uncaring despite what is going on & copious amounts of stock footage means that a few scenes are a complete mess to watch especially the ending. Overall this is a pretty dull film that takes ages to get going, it's well over an hour before we get any significant killer Tree vs. Navy action which is too long. This starts out like a mystery as we try to figure out what happened to the nine missing plane crew & a Penguin but it doesn't hold ones interest & it's pretty obvious what happened anyway, after that it's just a plodding monster film full of dull talk & stock footage bookended with some narration about nothing in particular.

All of the action scenes including the crash & the napalming of the island is nothing but stock footage badly edited into the film & there are other scenes of stock footage like planes flying, waves hitting rocks & shots of the island from above. The Tree monster look daft, they look like ordinary Trees but with thicker trunks & leaves that shake a bit. The best moment is when a soldier has his arm ripped off by one of the monsters in what was probably quite a graphic scene back in the mid 60's. Originally title 'The Night Crawler' the producer changed it which is one reason why he & Hoey feel out.

With a supposed budget of about $178,000 this was shot in about ten days this is badly made throughout. The acting is poor & very wooden.

. the Night Monsters is a pretty bad 60's sci-fi horror monster film with nothing to recommend it apart from some bad special effects which end up being funny & a guy having his arm ripped off.