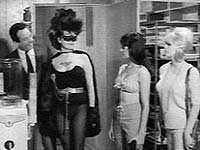 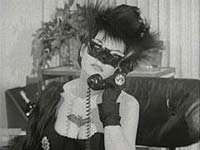 Anyway, I received this little mish-mash of a film as a present. I got it in the MST3K version, so it's funny. Chances are, the original version is just as funny as this one is. Just not in the way Jerry Warren planned it. Or did he?

Enough speculation. The film, that looks like the charred remains of several other films scotch-taped together, deals with a former burlesque-act-turned-superhero Batwoman (copyright infringement #1), who spends most, in fact, of the movie in a Merry Widow nightgown with a low top and a Michael Jackson hairdo. Here, she talks to her Batgirls through a ping-pong ball ring. What do these girls do? Fight "crime". In their spare time, dance to some band that should just go straight to the drugs. The "crime", in this case, is a scientist (who looks inexplicably like the one from THE CREEPING EYE) who invents pills that make people rain dance, and some two dumb guys with fake moustaches and some animal-man who acts like this was his big break. And their leaded by some guy named Rat Fink (copyright infringement #2) who wants a hearing aid that can also explode. Add in lots of dancing, some cruel racist jokes, Steve Brodie dancing (Ick!) Corman regular Bruno VeSota, stock footage from THE MOLE PEOPLE, a villian that splits into five different people, and you've got a night of what passes for entertainment in these parts.

IF you're like most people, you should probably keep away from the original form; such camp in its unaltered state could be deadly. For all the rest of you B-movie lovers, dig in.

Review by Timothy L. Fox from the Internet Movie Database.