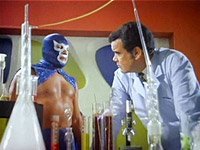 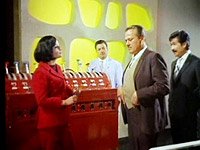 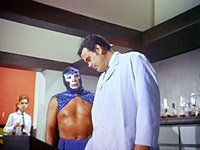 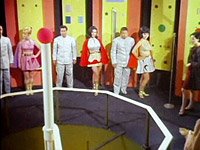 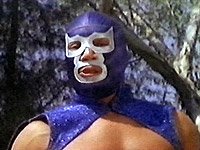 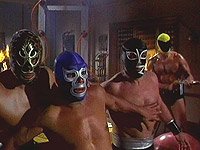 This was one of the first Blue Demon films that I actually saw, though I'd been aware of the character for some years prior. As I now operate a lucha cinema web page and collect lucha film art, I'm still in fairly regular contact with the film on one plane or another.

In a genre noted for markedly varying textures and styles, B D CONTRA CEREBROS INFERNALES -- and its companion feature BLUE DEMON CONTRA LAS DIABOLICAS -- shared a sort of modpop glitz.

Both shared a blaring, vaguely James Bondian theme and several oddball, pastel-spotted op art set panels. Also, unlike the earlier Santo entries, the Demon of this period lives in a more cosmopolitan venue, where wicked scientists and jewel thieves can easily hop a jet to take the plotline to distant locales.

Not that things are all skittles and beer for our hero. The Demon drives pot luck -- and shared pot luck at that. The Barracuda he drives in CEREBROS is donated to the villain of DIABOLICAS. For the latter, the Demon has to make due with a Harley.

Significantly, the Demon found himself paired with David Reynoso and Ana Martin, who spent much of both films exchanging fawning cow eyes. This is a throwback to the earlier genre films, where the masked hero du jour waves goodbye and speeds away as the love interest manifests itself in a final clinch between the second string leads. At about this time, Santo as engaging in the occasional lip lock in his own films (a bit jarring, as he maintained his mask in these sequences).

In their defense, Reynoso and Martin are far less irritating than, say, Fernando Cassanova and Ana Bertha Lepe, who served as the love interest in three of Santo's earliest flicks...

Intriguingly, the Demon acquires powers in this film -- gaining the ability to literally run through a solid wall without visible damage. He also picks up the ability to teleport rather uncertainly about, though whether this indicates a true supernatural nature (as he had in EL MUNDO DE LOS MUERTOS) or is some fluke of science is a bit unclear.

Overall, it's an enjoyable little watch, though nowhere as gleefully over-the-top as the films which pitted the Demon against supernatural creatures...