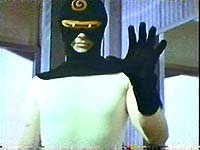 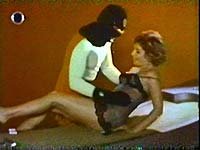 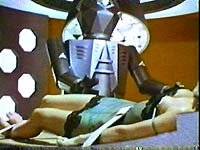 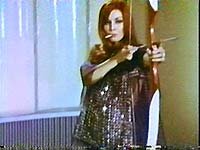 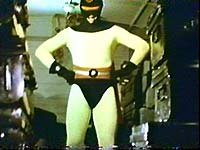 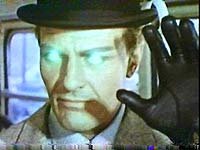 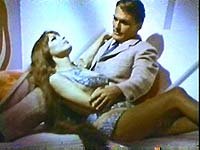 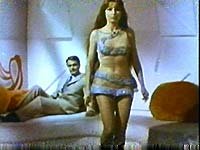 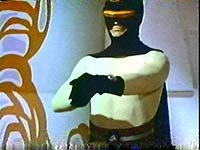 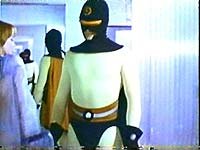 This DVD does not have captions of any sort and has been dubbed into English. The print is also very grainy and the DVD extras aren't particularly inspiring. So, despite all these flaws, I still was looking forward to seeing the film because it is so similar to another Italian film from the same era that I loved, DIABOLIK.

Unfortunately, while an enjoyable little film, it really came up short against DIABOLIK--probably because DIABOLIK had those great Mario Bava touches. Much of it is because Argoman looked much cheaper--like he was a low-budget cousin of Diabolik. His secret lair was nice but nothing like Diabolik's cave, his costume was pretty goofy and the film just lacked all the cool little touches of DIABOLIK. Now this doesn't mean it's not worth seeing--it's just isn't quite as good.

Argoman is a superhero who seems to be willing to stretch the law or work for various sides, though he is not evil or completely amoral (like Diabolik)--but he's also not some goody-goody like Superman. The beginning of the film shows him helping out the Russians, later he's working with the Brits and French. His shtick is telekinesis and other mental powers. He can move objects or people or use his will to make others do what he wishes, such as at the beginning of the film when he willed the firing squad not to shoot him but each other! Cool trick, huh? And, much of the time he's doing this he's wearing a weird yellow superhero costume with an odd hood.

The villain in this film is a megalomaniacal lady who calls herself "Queen of the World" (wow--now THAT'S an ego!). When they first meet, however, neither is in the form of their alter-egos. He's at his lair and she goes zipping by in her hovercraft. His mental powers tell him there's a hot lady on board and so he forces her to land on his island. There, he wines and dines her and gets some nookie before she ultimately leaves. Only later does he deduce that she is a villain--not just a lady with a hot body and loose morals! Unfortunately, during his crusade to stop the very hot Queen of the World, an evil double-dealing British official is killed and Argoman is blamed. So, later in the film he's undercover--trying to capture the bad folks with absolutely no help from the authorities! Oddly, however, when Argoman finds her lair, he mostly punches and kicks people and looks like a Batman wannabe. Why he doesn't use those amazing powers to have the villains kill each other is beyond me--it worked great earlier in the film! Only when the hot lady (now wearing a goofy tin-foil hat) attacks him does he resort to his great brain powers--though the lady turns out to be one of many doubles! Can he find the real Queen of the World and stop her before she takes over the planet? Tune in and see for yourself.

Overall, the film is great campy fun but cannot possibly be enjoyed unless the viewer has a love of kitsch and finds the whole thing rather funny. Serious folks who only like "sophisticated" fare probably won't be impressed...this is NOW Shakespeare!