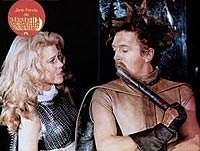 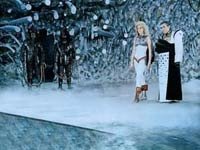 Just what were they on? "Barbarella" is one of those sixties films (the Beatles vehicle "Help!" is another) which, although it makes no explicit references to the decade's drug culture, nevertheless leaves the indelible impression that the director, the scriptwriter, the set designer, the costume designer, the cameramen and most of the cast were under the influence of mind-expanding drugs throughout the entire shooting period.

I first saw the film at university in the early eighties when a student film society organised a screening. Interest in it at that time may have been aroused by the release in 1980 of "Flash Gordon", another ultra-camp science fiction film which was undoubtedly influenced by it, and by the fact that one of the leading British pop groups of the era had called themselves Duran Duran in homage to their origins in a now-defunct Birmingham nightclub called Barbarella's.

The film is based on a French series of comic books, which I must admit I have never read. (Unlike, say, the "Asterix" or "Tintin" series, the Barbarella comics have never had much of a following in Britain). The action takes place in the 40th century. Barbarella, a beautiful young female astronaut, is ordered by the President of Earth to travel to the planet Tau Ceti to find a scientist named Durand Durand, from whom the band took their misspelled name. Durand is the inventor of a weapon known as the Positronic Ray, which the President fears may fall into the wrong hands.

The rest of the film is taken up with Barbarella's increasingly bizarre adventures on Tau Ceti. She goes ice-skiing across the planet's frozen surface, pulled along by an octopus-like creature, is menaced by flesh-eating dolls with razor-sharp teeth, seduces a blind angel (or "ornithanthrope"), meets the predatory lesbian Queen of a decadent city and survives an attempted execution by means of an "orgasmatron", a machine designed to kill by an excess of sexual pleasure. (Barbarella's capacity for sexual pleasure is so great that she blows its circuits). We are not, of course, meant to take any of this seriously; the whole thing is intended as a sort of tongue-in-cheek exercise in high camp surrealism, Salvador Dali meets Edna Everage. The surreal nature of the film is emphasised by the use of psychedelic lighting effects. (The opening song even includes the rhyme "Barbarella Psychedella").

Barbarella is played by Jane Fonda, who at the time was married to the director Roger Vadim, clearly a man with the knack of attracting beautiful women. (He had previously been married to Brigitte Bardot and had been the lover of Catherine Deneuve). I wonder if, when Fonda was taking her wedding vows, she realised that Vadim's interpretation of "for better or for worse" included casting his wife in eccentric films like this one. Her devotion to her wifely duties seems to have been at the expense of her career; she later revealed that her commitment to "Barbarella" meant having to turn down the leading roles in two more serious films, "Bonnie and Clyde" and "Rosemary's Baby". Moreover, many of the heroine's adventures seem to have been designed with the express purpose of showing off Fonda's figure in a series of provocative outfits, leaving her with a lasting "sex kitten" image. This was something she was never comfortable with, especially when she was trying to reinvent herself as a feminist and left-wing activist a few years later.

This is far from being Fonda's best film, yet she is about the only cast member who emerges with any credit from it, playing the heroine as a sort of wide-eyed innocent abroad. John Phillip Law, who plays the ornithanthrope Pygar, is so wooden that I wondered if he was under instructions to play his role with a deliberately deadpan lack of emotion. David Hemmings as the resistance leader Dildano shows us just why his career never really took off in the way it was expected to after his early breakthrough in "Blowup". (Hemmings's costume, looking like a pair of leather Y-fronts, is just as bizarre as anything worn by Fonda). Marcel Marceau shows that his talents as a mime did not extend to acting in spoken roles. Anita Pallenberg, better known for her relationships with several members of the Rolling Stones, was cast as the wicked Queen, but Vadim did not trust her to speak her own lines; the Queen speaks with the unmistakable contralto tones of Joan Greenwood.

"Barbarella" was a failure on its release, both at the box office and with the critics, yet despite the dodgy acting and the nonsensical plot it has since 1968 acquired the status of a cult movie. (Even back in my student days it was regarded as sort of historic artifact). Cults, whether religious or cinematic, can be baffling to everyone except ardent devotees, yet I must confess that I have a soft spot for this surreal relic of the hippie era. It is an ideal film to watch when returning from the pub late at night.