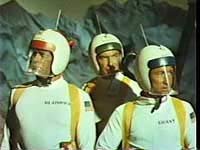 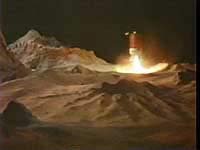 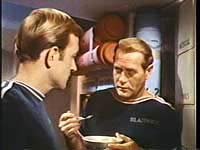 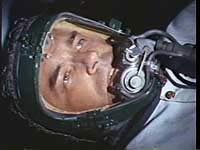 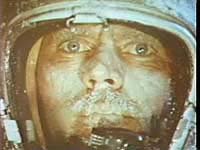 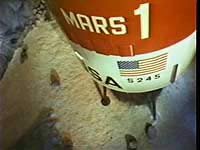 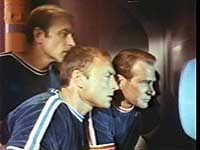 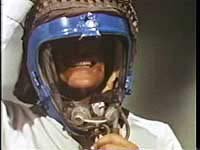 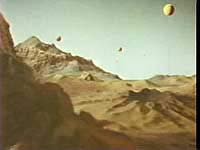 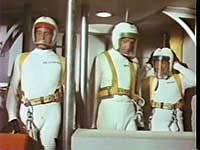 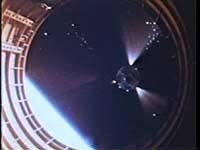 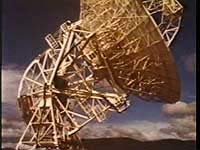 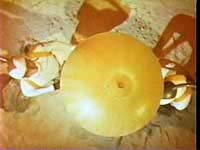 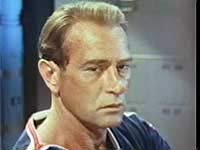 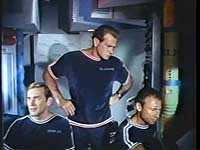 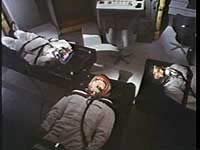 I love movies like this. Low budget hard science fiction effort played straight-up, non-campy, done with the best of intentions in mind with the limited resources the filmmakers had access to. If you had any doubt it's all on the level look no further than Darren McGavin as the capable no- nonsense commander of America's first manned mission to Mars. Which according to the way the film is edited feels like it took about a week, round trip.

My favorable opinion of the film likely cased by having followed the advice of skipping forward to the blast off and bypassing the preliminary nonsense. Not sure what all I missed just yet but subsequent scenes of females back at home sitting around being annoyed they have been gone so long don't bode well. The rest of the movie went swimmingly for this lover of improbable space suits, absurd model effects, studio bound alien planets, unsealed motorcycle helmets with antennae and oxygen tubes, stick figure aliens that look like Gumby dolls, space capsules equipped with office chairs, unexplained artificial gravity, absurdly entertaining music that actually works, and balloons.

On that note the film is actually quite satisfying if still clumsily made. Nothing wrong with that. One's suspension of disbelief only need be tempered by being assured that if the filmmakers had access to the budgets & resources "2001: A Space Odyssey" boasted they'd have come up winners too. They didn't, and persevered anyway with space suits consisting of downhill skiing garb, props that do nothing, and even threw in a meal in space scene: Takes up screen time, and converting contemporary food into space food only requires a few odd looking trays with futuristic utensils. Food is food.

I love the pan shots of the wind-swept Martian surface in miniature, the research balloon subplot, and the lost expedition angle with mummified (frozen?) Cosmonaut. Maybe they'd seen "Planet of the Vampires"? The aliens are great, very wise decision in not even bothering to have them move. Makes them more alien without even trying, and their use of a hand weapon on one provides the movie's biggest laugh. I love the stupid hoses connected to their motorbike helmets, the empty tool boxes they carry around, the backwards sound effects and the film's marvelously trippy color schemes. They may have been trying to play it square but this is one hell of a head movie & I'm not even stoned.

In all honesty, most viewers would likely be advised to skip it unless planning a bad movie night, which is a cliché but can still be fun. Those who enjoy low budget science fiction movies — and are inclined to admire art made under whatever circumstance the artist had at their disposal in the face of universal indifference & potential ridicule — will find a brave little movie here. The filmmakers weren't dummies, even working in a sly reference to Gemini 5's famous corned beef sandwich incident. They also knew how little they had and insisted on working with it, only to be shown up by someone more capable who had the mistakes of films such as this to learn from. For that matter I enjoyed this movie just as much as "2001" though for different reasons more related to playing space explorers with my pals after school. Or during school, whenever we could find the time and something to serve as a rocket ship. Same kind of spirit at work here.

And WTF is that theme song? LOL I want a whole CD of that. Awesome movie, just be warned about those first 17 minutes.