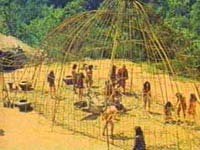 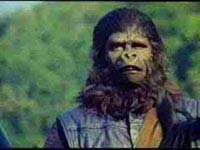 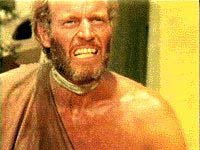 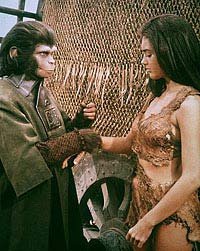 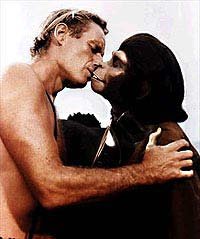 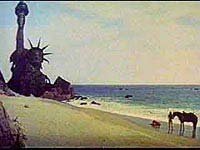 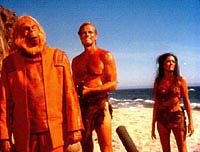 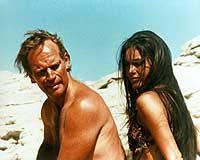 I remember recently having an argument at work with my boss who vehemently argued that 1968's Planet of the Apes is head and shoulders above Tim Burton's version. I had just come back from seeing Burton's and was quite impressed. And even though I had never seen this one, I argued the other way. I am not sure why I did this, perhaps it was just to play Devil's Advocate, maybe it was just cause I'm an ass at times or maybe I really thought that this version couldn't be better than the new one. After all, Burton's post apocalyptic futuristic ape world was inhabited by apes that were intelligent enough to form societies and create laws but they were too stupid to realize that the world they live in is big enough for both humans and animals. It went to great lengths ( or so I thought) to show man's, and conversely apes ignorance when it comes to the welfare of anything that is considered lower in intellect. In short, I felt that Burton's Planet of the Apes touched on many issues that are important to me. I couldn't really see how a film made 30 some years ago could top that.

Boy was I wrong!

I rated 2001's POTA an 8.5 based mostly on it's theories and because of the action in the film (and because I have a soft spot for Michael Clarke Duncan). If that is true, and I do feel that way, then 1968's POTA is easily worth a ten and that is what I am giving it. Very few films make you feel something. Let me re-phrase that. A good film will entertain you, an even better one can enlighten you. But only a very few precious films can keep you entertained and fill your head with a plethora of thought provoking ideas and "what-ifs" at the very same time. Planet of the Apes is one of those films. JFK, and all of it's pseudo-theories about the assassination of the president left me feeling exhausted and afraid of the world we live in. Films like The Matrix (you're a disease, Mr. Anderson") and T-2 ("it's in your nature to destroy yourselves") and Instinct ("these are the takers") gave me similar premonitions. You can add Planet of the Apes to that select breed of films that gave me a similar feeling.

This is a film that takes its time to tackle such weighty issues as evolution, human rights, animal rights, racism, religious ambiguity, military strong arms and many other issues. The screenplay was skillfully adapted by Rod Serling of Twilight Zone fame from a book by Pierre Boulle. And although I have not read the book, I have read that the film is different in quite a few ways. For instance, the book and subsequently Burton's version, has the apes very technologically advanced. But because of technological inferiority in 1968 the film took the apes and had them living in a primitively built cityvillage. They had buildings made of rock but not concrete. The had guns but not automatic weapons. And although Burton's version hasn't introduced them to guns, the apes are much stronger, much higher up on the evolutionary scale. But in this POTA, there seems to be a missing link. Certain apes have theories that apes really evolved from man and yet the humans in this world cannot speak. They seem to understand some things, but they cannot comprehend what is being said to them all of the time, kind of like the way our animals are today. This opens up a plethora possibilities. Are these humans mutants, are they a cross between man and ape? Have they been scientifically altered by some medical Nazi-like experiment and over time, generations have adapted to these experiments? There are many weighty issues open for discussion. Other reviewers bring up the possibility of a nuclear war and one of Taylor's observations was that there may have been a nuclear shower or meteor storm that devastated humans, just like the dinosaurs before them. And doesn't that make Heston's speech at the beginning of Armageddon ( it happened once it'll happen again.. it's just a matter of time) all the more chilling?

Contains major spoilers in the next few paragraphs. Please, do not read if you plan on seeing the film soon for the first time!!!! You have been warned!

2001's version of POTA was quite impressive because of technology first and the story second. While it did think about things such as animal rights and such, it did not hold it as important as this version does. This is a film that you could watch over and over again and still have it give you that sinking feeling in your stomach every time. The ending alone is enough to open up discussion for months to come. And I have a theory. So bear with me.

If what he sees at the end of the film on the beach is really the whole thing sitting there, and not just the head ( meaning that the rest of it is buried some 200 feet in the sand, then this presents a whole slew of possibilites. Dr Zaius has discovered the cave where he believes there is sufficient enough evidence that there were intelligent human occupants before apes. The basis of his evidence is that on different levels of the earth, buried in the sand and clay there are artifacts to support his claim. One one level he found reading glasses and deeper still, he finds false teeth and in another level, even deeper he found a babies doll that talks. Proof that evolution granted man the ability to talk. But when Taylor is left to "find his destiny" what he finds is the thing that may be buried so deep in the earth from thousands of years of stagnancy. What if what he is seeing is really all in tact, just buried some 200 feet under the earth? If they could dig that far down, what would they find? Would they find dishes or the remains of houses? Would they find subway tunnels, sewage pipes, bones of sewer rats, bones of CHUD like people? The possibilities are endless. This could turn the ape world upside down and it would create a division in those that are ardent followers of the ape religion and those that believe in evolution. Doesn't this kind of sound similar to situations here in our time?

POTA is the one of the best Science Fiction films I have ever seen and this would easily crack my top 100 films ever made. And that is after 2 viewings. I want to go back and watch this film a few more times so I can really understand it. It is a rare film that entertains and poses some very interesting and provocative questions. And as I said earlier, there are very few films that can do something like that. Films like American Pie or Raiders of the Lost Ark and The Godfather are great because they entertain and make you laugh or cheer. POTA is in a class with other films like T-2 and Aliens. These are films that also entertain but they force you to examine who we are and where we have come from and where we could possibly go. Is it possible that man will one day become so unbearable that some divine intervention will occur so that we are not the inferior species? A film like this makes you think and wonder? What if......?

10 out 0f 10-- This is one of the best films I have ever seen and it is one that I am going to get my kids to watch someday. Burton's is fun and thought-provoking. This one is simply mind blowing and intellectually stimulating.

Review by Dan Grant from the Internet Movie Database.