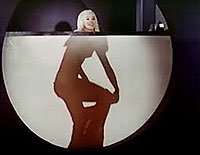 A mission to the moon discovers a couple of aliens who are stranded there in a large spacecraft. It turns out one of them has leukaemia, so the astronauts agree to return with them to earth to seek out a physician who can treat this. But there are unenlightenedcorrupt human forces to contend with back on terra firma.

For me this was a film of two parts -' the sci-fi section on the moon and the more action-orientated section on earth. My issue with the film was that the first bit is much more interesting but only constitutes about a third of the movie. Once the action relocates to Earth it loses a lot of its interest and becomes a slightly tiresome action caper. I guess that overall this awkward combination of sci-fi with a crimeaction story is one of the things that makes Mission Stardust quite distinctive. But for me its good parts were loaded at the start, meaning that by the end it felt a little disappointing to me.

It's a 60's sci-fi film, so some slack has to be given regarding effects work. Quite a lot of them are really bad here but there is some decent model work for the spacecraft, while the robots were pretty original in design. The moon scenes in general were pretty well done and had a sort of Star Trek original series type of charm. The lead male characters were quite forgettable but the lead female alien Thora was quite striking and a good character. It is also worth pointing out that, like a lot of Italian genre movies of the time, it has a very good soundtrack as well. So, there are good things about this film but overall there weren't enough to save it from its tedious aspects.