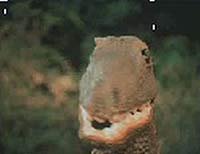 There are a lot of bad giant ape films. There are also a lot of bad movies which feature less than authentic "African" safaris which are shot on tacky studio back lots with stock footage of wild animals in place of the real thing. Therefore, to stand out in this field is an accomplishment. The Mighty Gorga does. I've seen, and enjoyed, a large number of bad giant ape films and I can assure you they don't come any worse than this one. The only exception might be the Korean made atrocity APE, but its a close call.

This film is absolutely awful in every way! So I was thrilled to tape this off TV one night. The ape costume is among the cheapest ever with plastic eyes which do not move. The Witch Doctor character (who also has a 2nd speaking role as a cashier in a booth at the circus near the start of the film) rants and raves a lot about evil "white men" coming to the ape's territory in "Africa" while he offers up "young maidens" as sacrifices to the Mighty Gorga giant ape. Of course the witch doctor is as white as Pat Boone and "Africa" is a few bits of stock footage and the worst movie back lot set imaginable.

The special effects are among the worst ever. I especially enjoyed the "fire" scene in the animal trader's complex. Grade Z movie leading man Anthony Eisley and 1 dimensional evil "heavy" Scott Brady team up again after being in the same director's awful Journey to the Center of Time a year or so before.

Its hard to convey in words just how awful this movie is. If you enjoy bad films, check this one out! You will be amazed.

Review by jmike from the Internet Movie Database.