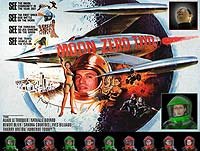 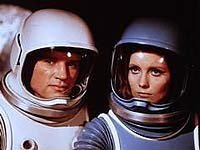 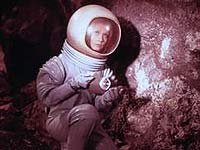 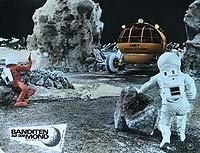 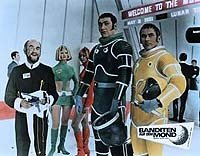 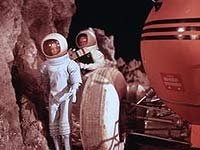 I saw this film with the help of the guys at MST3K. This is, in all likelihood, the only way I would have ever watched this film that is set in space and has the elements of a western within it. Not really a film I would care to see without some good riffing. The film was done by Hammer, which is cool as that studio put out a lot of good horror films back in the day. However, if this is an example of their science fiction skills they are not quite up to par. Makes that film, "Green Slime" seem so much better! The opening is a bit reminiscent of a Pink Panther film as it has a cartoon while a horrible song plays. Thus, it does let you know that this film is a bit more about fun than trying to be anything serious. I just think it would have benefited if they could have gotten a couple of the better veteran actors that normally sign on to a Hammer film in it.

The story has a city on a moon where the drinks are bad and the dancing ladies worse. A pilot who was the first man to travel to mars and is now a pilot for hire and his navigation buddy are about to be made an offer that could net them a new spaceship. A woman though has arrived on the moon, and she is in search of her brother who sent her a message to meet him in the city on the moon. The pilot meets with a man who wishes to crash an asteroid onto the moon made of sapphire; however, the pilot is also interested in helping the young lady locate her missing brother. Seems there may be something sneaky going on!

This movie was riffed during the first official season of MST3K and so I knew it was not going to be quite as funny. They got much better in later years, often having me constantly laugh, but during their first season it is a chuckle or two. Though, that is not too surprising seeing as how by the end they had made riffing an art form and here they were still working out the kinks. It was a pretty good episode though, probably one of the better first season episodes I had seen. Though the funniest part of the episode was the bumper where Joel cut off the gravity, making fun of the scene from the movie.

So this film was not a bore to watch as it had plenty going on. Just needed perhaps a better actor in the lead role and in the villains role. Both just could not carry their weight. The girls in the film were your typical Hammer girls though, rather cute in that British 60's way. Still, not as horrid as some films featured on the show, but in no ways anything I would care to see without the MST3K gang unless there was nudity, and my guess is there was not any.