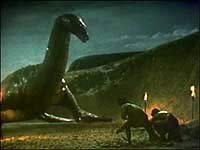 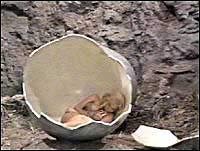 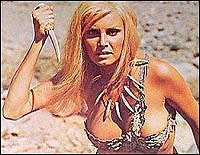 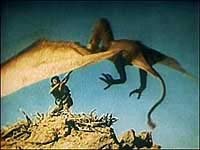 When dinosaurs ruled the Earth there were no humanoids to begin with, and even if they had existed they could not have been this silly. While WDRTE is a total rip-off of "One Million Years B.C.", it fails to make any sense. The said movie at least has a coherent plot and it's possible to understand both why the cavemen behave the way they do and what is going on in the movie.

In this shameless rip-off, however, the plot is utterly confusing: a dumb blonde escapes a ritual sacrifice and finds refuge in another tribe, where she soon again - for some reason - starts receiving violent vibes, first from a jealous female, then from the religiously-fanatical males. (It was tough being blond and pretty in B.C., as well as A.D., it seems.) At one point in the movie this second tribe falls into religious fervour, and from that point onwards all they can think of is how to kill the blonde bimbo and her stupid boyfriend. I kind of imagined that cave people would spend most of their time hunting for themselves and their families, not having so much time to muck about, but I guess I was wrong: cave people were actually very very well fed, utterly saturated with all life-sustaining nutrients - and had endless stocks of food hidden SOMEWHERE, apparently. Hence why they could spend so much free time hunting hot blonde chicks and their devoted boyfriends.

More confusion is brought about by the cave-idiots getting their own language. They interact quite a lot and the viewer is usually left completely in the dark as to what the hell the surprisingly hairless morons are babbling about. If "Star Trek" had every obscure little green alien speaking English then why the hell is THIS little piece of crap film attempting "realism" for? It's hilarious: a movie in which dinosaurs and homo sapiens live in the same era, and in which fashion-modelized hot blonds and brunettes wear stone-age wonder-bras, is attempting realism by making its actors speak in an invented language! This so-called language has every word sounding like "Akita". "Akita" appears to be an all-purpose word for just about everything and every situation; it can mean "there", "over here", "I didn't", "you stole this, you blonde whore!", "I didn't, he gave it to me, I swear!", "kill them!", "Leonard Maltin sucks!", "sharpen my spear", "look: a huge wave wants to smother us!", "where's my hair-stylist?", etc.

"Akita" is apparently part of a three-word language, because it sounded to me as if they were repeating the same three words, over and over. F'rcrissakes, even cows use a bigger variety of noises to communicate with when they discuss about grass than these ridiculous B-movie cave morons.

Lest you think WDRTE is all dumb, I want to point out the movie's proud dinosaur who mistakes a blonde Playboy gal for one of its own young! The blonde seems to find an intellectual equal and somewhat of a soulmate in this hapless, large lizard - so she starts giving it orders.

One of the few bright points is the idea of having the dinosaur "adopt" the much-hated blonde. This cute sub-plot should have been far more integral to the story because it was a breath of fresh air, as insane as it was (or precisely because it was insane).

The dinosaur special-effects are above-average; only on a few occasions were there cop-out scenes with small 20th-century lizards posing as their huge, prehistoric ancestors. The film is visually rather nice in the evening scenes on the coast. The actresses are quite sexy with their silly-looking furry wonder-bras, and extremely oiled-up bodies. In fact, everyone in the movie seems to have been covered with litres of oil. I guess half of the movie's budget went on that. From Italian mobsters's hair? There was potential for this movie to be something cute, enjoyable, and different. Unfortunately, the makers of this smelly cheese had only one thing in mind: how do we rip off "One Million Years B.C." to the utmost? So many things remind of that film: 1) blond tribe vs. brunette tribe nonsense 2) a cave language 3) cave people who become outcasts in their own tribes 4) a brunette cave-woman being jealous of a blond one (cave-gentlemen also preferred blondes) 5) and even the ending is a rip-off: just like in "One M.Y. BC", the violent shenanigans amongst the cave people are interrupted by a natural disaster, the only difference being that it was an earthquake in the said movie, and a (rather snail-paced) tsunami in this one.