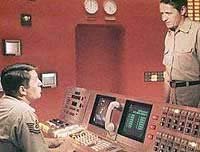 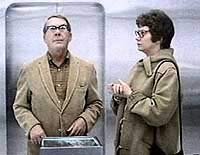 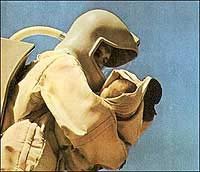 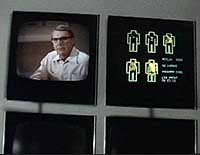 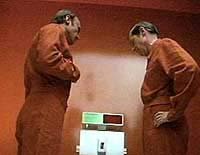 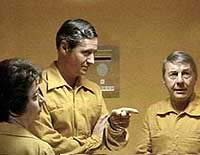 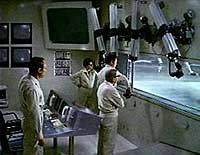 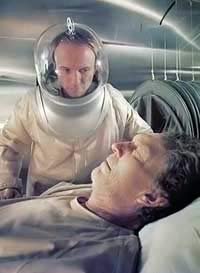 A returning space probe crashes to Earth in modern-day America, leaving the population of a small town mysteriously wiped out. As the military prevaricate around how to act, it's up to a group of scientists, sequestered covertly to an underground bunker, to figure out the cause and avert a potential disaster.

The Andromeda Strain was the first filmed adaptation of a work by author Michael Crichton, later the creator of ER and author andor screenwriter behind mainstream mega-hits of variable quality from Jurassic Park and Westworld to Congo and, ahem, Twister, and while he may have sullied his name somewhat with his more ludicrous later stories, this early work from his hit 1969 novel benefits enormously from his years as a medical student, and the believable, procedural detail that he brings to bear.

This is not to say that we don't get a fair helping of the "stuff" of science-fiction. There's plenty of futuristic (for 1971) hardware, a form of alien life (although unlike any seen in cinema before) and even a few lasers near the climax. But the meat of movie lies elsewhere, principally with the drama going on between our band of lab-coat technicians who are, uniquely for that most short-changed breed, real people. Complex, difficult, tired, argumentative, largely unattractive, and totally believable as they struggle to deal with the situation they have found themselves dumped in. Particularly wonderful is the sharp- tongued, dour-faced, chain-smoking researcher essayed by Kate Reid, who brings a much needed but entirely natural sardonic wit to the otherwise dry proceedings.

Also effective, and again reflecting the changing attitudes of its time, is the largely negative impression the movie gives of the politicians and military commanders on its periphery, who are either incompetent or untrustworthy to some degree. It's a common stance to a modern audience, but must have been pretty coruscating at the time and reflects a sense of malaise that feels very much appropriate to its era and yet still rings true today.

Marshalling the project is director Robert Wise, who has often been looked down upon somewhat as something of a journeyman, a studio man... or to put it harshly, as some would, a hack. Generally a director for hire, who rarely, if ever, autered personal projects, I suspect he'd have no problem with that description of him, but that should not lead us to underestimate his rare skill as a filmmaker. In a remarkably varied career that began in the 1930s as film editor on, amongst others, Citizen Cane no less, he has directed several stone cold classics, from The Day The Earth Stood Still (1951, and the only science-fiction to rise above the pulp b-movie nonsense of its day), West Side Story, The Haunting (1963, and still one of the most effectively chilling ghost stories ever filmed), and The Sound Of Music. Yes! Hate it all you like, the third most successful movie of all time. He was quite some hack then.

Nearly forty years into his career by this point, Wise brings a freshness and daring to the project. The visual look is bleak, almost documentary like. The research centre that the film spends most of its running time inside looks and feels wholly believable in spite of a fairly modest budget. He recruited FX guru Douglas Trumball, who had worked not long before on 2001, and together they ensured a rigorous authenticity in the design of the technology involved, such as the communication screens, which actually worked for real, rather than being post-production optical effects as would have been the norm for the day.

There are some remarkable visual flourishes. In particular the use of split screens (back in vogue recently with its (over)use in the series "24"), which, as well as adding to the documentary look, are deployed, quite unexpectedly, in dream sequences which are at once both stark and abstract and infinitely more authentic feeling than a thousand misty dissolves that had previously been the visual shorthand for almost as long as cinema itself. In a few seemingly effortless, but intellectually rigorous moves, Robert Wise showed just how effectively he could make a film absolutely modern in look and feel (at a time when a young, hungry breed of independent spirited filmmakers were turning the old Hollywood studio system on its head), yet completely without drawing attention to itself.

It's not a perfect movie to be sure. The obsessive procedures used during the "descent" into the complex drag on rather too long, and the finale indulges itself the venerable cliché of a countdown race that was rather clearly signposted from the off. But despite these minor flaws, The Andromeda Strain delivers in bleak, taught tension with a satisfyingly paranoid atmosphere and effectively essays a disturbing vision of an all too plausible disaster scenario.

Review by eatfirst from the Internet Movie Database.