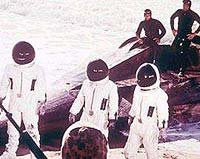 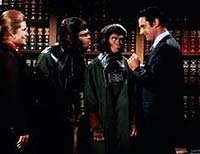 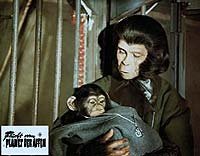 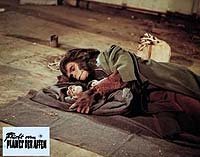 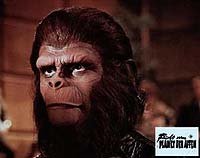 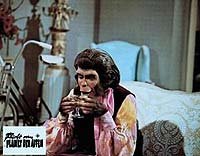 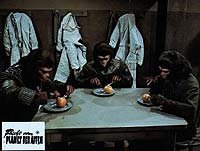 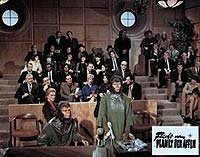 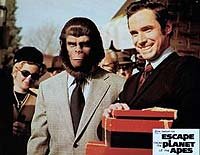 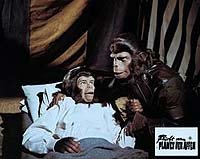 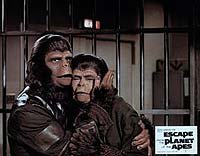 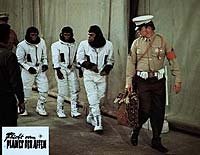 Escape from the Planet of the Apes is an odd one, to say the least. There is a notable deviation in the franchise's tone up to this point, and though some might find it jarring, I found it rather refreshing and overall serviceably intelligent given the ridiculous premise. Though this film almost solely exists via a contrived, greedy studio request, "Escape" manages to be both clever and entertaining enough to pass as a solid franchise entry.

Don Taylor is the third director to helm this franchise, and does a competent job overall. It's well shot in a standard kind of way, but well-shot nonetheless. The beginning has a good reveal, and sets the dual tone of thrillercomedy, which I think Taylor handled well. I'm impressed at how coherent this film is with genre elements from comedy, romance, tragedy, thriller, action, sci-fi, etc.... though these genre influences will turn some viewers off no doubt. For what it's worth, I find it to be handled well, though nostalgia likely has a role to play in my ease with it. As for further overall flaws, this installment admittedly can be borderline campy at times. Specifically, the shot of the baby chimp at the end is rather lazily edited (despite being an important plot point). As per usual with these films, the most integral component lies in the writing.

Written by Paul Dehn, who first appeared in the franchise to doctor the Beneath the Planet of the Apes script, this film manages to retain its social commentary with intelligence and more subtlety than ever, whist retaining the franchise's tradition of tragedy. The commentary on racism is as evident as ever, though there's also commentary on bureaucracy, morality, and even animal rights. Something this franchise has done very well (particularly here) is it's diverse portrayal of ape and human characters alike, displaying diverse perspectives and moralities, as though to say that despite looking different, we're all similar. There is never a point in this franchise in which an entire species is scapegoated or deemed as the "good" or "bad" guy--it dabbles in shades of grey, just as real people do.

This entry also works as a very clever reversal on the circumstances of the first film, placing Cornelius and Zira essentially in the shoes of Taylor and Brent. The most notable aspect that portrays this is the trial sequence. This reversal also results in some quirky fish-out-of-water humor, but more notably, a conceptually compelling reflection upon the first film, which in itself was a reflection upon humanity. A reflection upon a reflection if you will, driving the concept to a new level of realization--just like the painter painting himself, painting himself, etc.... It fits an overarching theme of infinite regression, which ties into Hasslein's theory of time, which essentially lays the groundwork for the original series' overarching progression. If there's one great thing Paul Dehn brought to this series, it's giving this franchise a clear direction and building a timeline that is intricate and thoughtful, even if at times convoluted or contradictory. The question of how our choices affect the future is present through the remainder of the franchise, though is represented best in this installment.

The writing isn't perfect however. The salvaged spaceship and time-travel premise is a stretch to put it lightly (though given the previous installment, was a better explanation than what could've been hoped for), and the comedic elements are bound to be jarring for many viewers. The character of Milo also isn't as fleshed out as I'd like him to be, which is especially disappointing as he is one of my very favorite characters in the extended canon. They also go into more detail about the salvaging of the spaceship in the comics, but those are the comics: on this front, the movie failed. There is also a bit about Aldo's revolution, and this comes in later as an unexplained plot inconsistency. It can only be speculated about, and the comics provide an almost-explanation at best.

Roddy McDowall and Kim Hunter are more endearing than ever as Cornelius and Zira. Zira in particular doesn't get much credit for being such a strongly written and acted character. In fact, I'd say this is one of the strongest female characters I've ever seen on film (and this was the 70's, folks). The human characters often work as reflections upon characters in the first film, and are generally competently portrayed, if slightly gimmicky at times. This film also introduces one of my favorite human characters in the franchise, which is Armando--a wise and sympathetic man played by Ricardo Montalban.

Because of the greatly reduced ape cast, the attention to John Chamber's prosthetics is at its best by default. No longer must we endure the dreadful pullover ape masks! Visually this is probably the least interesting film, though that attributable to the time period in which it takes place, and is understandable.

Jerry Goldsmith returns for his second and final Apes film, and delivers (arguably) the best score of the original five movies. Though his avant-garde score for the 1968 classic is a close second, his work on "Escape" is superior on a melodic and rhythmic level, portraying the underlying weirdness & suspense brilliantly alongside the comedicromantic elements. I dare say that this is even some of Goldsmith's best work.

"Escape" is no doubt a step up from "Beneath", succeeding in being more subtle with its commentary, and arguably being less-dumb (it's better than mutants vs apes, but the spaceshiptime-travel shenanigans are again, a stretch). I'll probably like this movie more than most, though I find it to be one of the franchise's stronger points regardless. This film has a solid recommendation from me, yet one should also consider that this isn't a stand-alone entry, and might have to decide whether they want to engage in the whole franchise first.

Review by Sparse from the Internet Movie Database.