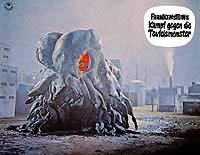 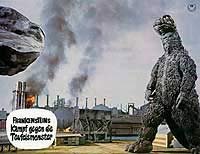 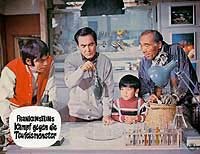 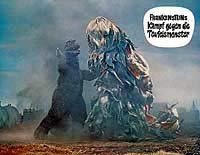 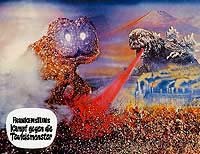 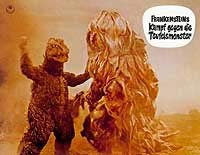 By 1971, it was clear that Godzilla, that mutant fire-breathing dinosaur borne of nuclear holocaust (and human hubris), had become a superhero of sorts - defending his home turf of Japan (and the rest of humanity as a whole) from all sorts of monster threats, both from Earth and outer space.

To put it simply, "Godzilla vs. the Smog Monster" scared the living daylights out of me when I first saw it! No "Godzilla" movie before or since had ever done that to me before. Like the one that started it all, 1954's Ishiro Honda-directed "Gojira," "Godzilla vs. the Smog Monster" has a message, and an urgency to it, that has been rarely seen in the genre since before and after its release in 1971.

"Godzilla vs. the Smog Monster" was an anomaly of sorts from other "Godzilla" movies released during the '70s. It deviated in many ways from established formulas and principles that had since become common to the genre. It reverts back to the growing sense of urgency and impending apocalyptic doom that hadn't been seen in the kaiju-eiga ("Japanese monster movie") genre since "Gojira" back in 1954. In short, "Godzilla vs. the Smog Monster" has the approach and appearance of a full-fledged horror film, rather than your typical sci-fi monster smash-up - and make no mistake: there's some pretty scary stuff going on here (in spite of the ultimately mixed results of the film's presentation).

Japan was undergoing a huge pollution crisis in the late 1960s and early 1970s, a result of its booming economic and industrial prosperity in the wake of post-World War II reconstruction. "Godzilla vs. the Smog Monster" has Godzilla returning to battle the Smog Monster of the title, Hedorah, an alien life-form that feeds on pollution and proves nearly impossible to kill, even for the mighty King of the Monsters himself. The creature arrived here on Earth from another galaxy and fed on, and thrived in, the polluted waters of Japan's Tokyo Bay. In the end, it takes the combined might of Godzilla and the Japan Self-Defense Forces (JSDF) to finally combat and defeat the horrifying monster.

I'm not really spoiling anything by saying that Hedorah is ultimately defeated by the combined efforts of Godzilla and the JSDF - I'm simply proving a point of how dangerous Hedorah is to Godzilla, and humanity as a whole. I'm also demonstrating the urgency of the film's message about pollution and how human beings must do their part to prevent another Hedorah from arising again. Japan did eventually recover from its pollution crisis, but it was clear that Godzilla also leaves a hefty warning at the end of this film, as if to say, "Don't make me come after you next."

Directed by Yoshimitsu Banno and co-written by himself and Takeshi Kimura, "Godzilla vs. the Smog Monster" is a unique entry in the first-generation Showa-Era "Godzilla" films; Godzilla himself would not face a monster like this again until "Godzilla vs. Biollante" in 1989 - the crowning achievement of the second-generation Heisei-Era film series (and my personal favorite film from that era). Teruyoshi Nakano's special effects highlight the fact that Hedorah was unlike any monster Godzilla had ever faced prior to 1971, and represented Godzilla's first truly significant threat (yes, even more so than the mighty three-headed space demon King Ghidorah). Hedorah, is after all, a walking pile of sludge capable of changing into multiple forms and emitting a corrosive sulfuric acid mist that kills anything it comes into contact with. And by film's end, Godzilla has the gruesome battle scars to prove that Hedorah is a significant challenger to his reign as the "King of the Monsters."

This is a dark, cynical, and angry film - the likes of which haven't been seen since "Gojira." Much of this film's action is set at night - heightening the horror movie motifs of the picture and the growing sense of impending apocalyptic doom; great credit must be given to director Banno for deviating from set formula (and reportedly as a result of doing so, he was banned from ever working in the kaiju-eiga again by producer Tomoyuki Tanaka, who was in the hospital recovering from an illness during this film's production and was thus not involved in the film much at all). This movie frightened me when I was younger (the only "Godzilla" movie to do so), and there are still parts of it that I have a hard time watching (any of the scenes featuring the wake of Hedorah's destruction have a way of leaving a lasting impact on the viewer, since graphic scenes of human carnage, death, and destruction were a rare occurrence in the "Godzilla" films following "Gojira"). Yeah, the film has many scenes of destruction and nightmarish imagery that will certainly frighten anyone not prepared for it, and expecting "Godzilla vs. the Smog Monster" to be like any typical Japanese monster-on-the-rampage movie.

This is the most nightmarish "Godzilla" film made since "Gojira" in 1954.