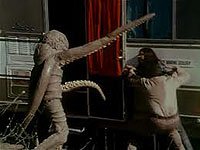 I was not expecting much when I watched this film via Amazon Prime and it managed to still be worse than my expectations. Perhaps I thought it would be better due to Rick Baker being part of the team behind this and I know it knows how to do great make up and such, but this one featured a monster that could not open or close its mouth, blink and it only minimally moved its eyes. There are a couple of good kills where I believe Baker had to have a hand in, but otherwise this film is a bit slow. I mean, I watched Slugs the other night and the slugs were faster killers than Octaman!

The story has scientist testing water in a Latin American country and they discover a small octopus with strange eyes and rubber texture. Okay, they didn't mention its rubbery look, I did, as it looks like a toy I once had as a young child. Well they get some guy to back their expedition and they travel on a magical RV where if you look out the window you can see Africa! Seriously, at one point the woman looks out the window and sees a Cheetah. Well, when they arrive they find the person they left behind dead and they begin to search for the large creature and one of them keeps getting hit in the face by it, they capture it and manage to lose it within seconds and they get trapped in a cave that seemed like its only purpose in the movie was to pad out the film!

So we have bad looking monster, a very unlikable cast and very little in the way of gore and no nudity. Sure this film is nice to make fun of, but as they are in that cave you want to yell at the television for that one guy just to call to the others to come on instead of crawling back through the cave to get them. So if I am rooting for someone in this flick it is the monster who keeps blowing its opportunities to kill everyone cause he wants the woman...I don't know why as he has no genitals to speak of.

So, if you want to watch this, be prepared to make a joke or two. I am surprised it was never featured on MST3K back in the day. The monster looks like he was built to battle Godzilla, but Godzilla said he would not work with such a trashy looking opponent so it got regulated to one of those Ultraman ripoff shows instead. Even the creatures in Green Slime looked a hundred times better, as you can literally see the boots on the tentacles it is walking on!