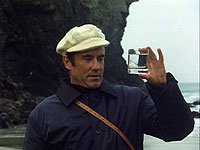 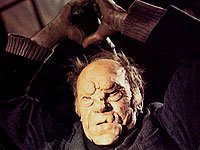 I came across this film by accident while I was looking for movies with George Sanders that I could watch online. This film was one of his last before his unfortunate suicide at the age of 65. I'm sure he did some high living because he is a very old 65 in this film.

That being said, most people, especially horror aficionados, probably won't cite this as a horror film, per se. I also happen to agree with them. However, it has enough of a horrific element, a sort of Lovecraft meets X-Files, that I was compelled from beginning to end. Some viewers might say there is no real payoff, but the film itself as a whole is the payoff. As much as I enjoyed Nothing But The Night, which I rewatched again recently, you might imagine my delight at finding(afterwards) that this film was also made by Peter Sasdy. Mr. Sasdy must have enjoyed the locale of this film because I believe it is the same isle used in Nothing But The Night made one year later.

The plot involves a environmental research group called Doomwatch(based on a TV series) who sends out one of their researchers to collect some data from an island were there was an oil spill. The research was to find out what sort of effects the spill caused to wildlife in the area. The researcher, one Dr. Del Shaw(played exquisitely by Ian Bannen), arrives on the island and finds himself hampered at every turn by the locals who shun him immediately. They are unfriendly, mysterious, and even violent at times. He meets one person on the island, a schoolteacher, who is an outsider like himself, though she's lived there two years. She, too, is untrusting of the new visitor, but she quickly warms to him while the rest of the inhabitants remain cold and aloof. The film cuts back and forth between island investigations and lab work back at Doomwatch HQ. Apparently, someone has been dumping chemically enhanced pituitary secretions sealed in cannisters into a No-Dumping zone on one side of the island. The navy also had previously dumped toxic waste there(hilariously, or rather, sadly, no one seemed particularly concerned that toxic waste cannisters were dumped in the ocean near an inhabited fishing village). Here's where George Sanders come in. He has more than a cameo and, as many veteran actors tend to do, he is starring in a low budget thriller before his untimely death. However, while this film is low on budget and scares or effects, it makes up with excellent acting in spades. Sanders looks incredibly old as the Navy Admiral or whatever his rank is, but his scenes are still quite good. The villagers, once they learn of the cause of their distress(being deformed by eating fish that ate the pituitary chemicals), revolt against Dr. Shaw and are even willing to kill him to keep their community safe from mainlanders.

The directing is in keeping more in line with a TV movie, not quite as good as Nothing But The Night, but the acting, "gush", is stupendous for such a modest budget feature. Ian Bannen is very good and the only place I recall seeing him before was as the Leper in Braveheart(he got under my skin(heh) in that role).

This is a good Sunday afternoon film that even kids could watch(the mutated villagers aren't all that scary). Highly recommended for buffs who get off on refined acting. God, how I want to find that island and live there. It's so quaint looking. I just want to throw on a nice turtleneck sweater, a pea coat, and an ivy cap and just sit in the pub smoking the old calabash pipe.

Review by Tender-Flesh from the Internet Movie Database.