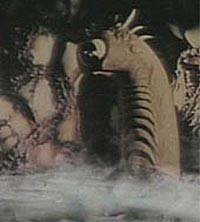 A mysterious "Sex Ray" bombards earth, causing those subjected to be overtaken in orgiastic impulse, until it finally makes contact with an airplane carrying one "Flesh Gordon" {Jason Williams} and "Dale Ardor" {Suzanne Fields} who are also momentarily overwhelmed by its libidonous effects, until the plane is doomed to collision due to the preoccupation of all of the passengers inclusive of the pilot and crew; so he takes Dale in his arms and proceeds to parachute out into the cold night. As they descend, Dale, in a really bad platinum blonde wig, decides to perform fellatio on Flesh until culmination.

When they finally land in an expanse of woodland, they are met by a "Dr. Jackoff", a scientist who has constructed a spacecraft, who proceeds to array Flesh and Dale with lurid conspiracy theories {ironically, he would have done well to guest on C2C!}. Eventually, he explains that he has traced the origin of the sex ray to a far off planet with the predictable name of "Porno", which is ruled by an "Emperor Wang" who wears far too much makeup - a planet dedicated to sensual indulgence {rather like The Rocky Horror Picture Show's "Transexual Transylvania"} which is made clearly evident by the majority of the main chamber floor occupied by nude nymphomaniacal lovers constantly undulating in Satantric bliss under the sovereign gaze of Wang, who eventually takes a liking to earth woman Dale Ardor, and plans to 'marry' her to the chagrin of Flesh Gordon, who causes a minor disruption therein, and is therefore at first condemned to immediate execution, but at the behest of The Princess who also happens to be a Sorceress, convinces Wang to "trial by ordeal", which involves a battle with feral cat women. Her desire is rewarded with a dream-like sexual sequence with the so-called "blonde giant" Gordon. They are eventually interrupted and attacked by Wang's forces, and escape to Arboria where they meet with a "Prince Precious", a gay Robin Hood-type with anthropic pretensions {the character actually reminds one of a hippie-Jesus in appearance, ideology, and mannerisms}, and teams up with Gordon and Jackoff to supplement their own rebel group.

The only weapon which can counter the sex ray is the Sorceress' {who parishes in the confrontation} nipple pasties which Dr. Jackoff so gallantly applies to himself, lifting his shirt to prepare for battle. Wang whips out the heavy artillery with what he calls "rape robots" with drills for penises, which did inspire a chuckle or two.

Dale Ardor is kidnapped by a group of amazonian lesbians and is subjected to their cunnilingual initiation rites until 'rescued' by the group, to which the lesbians release a locust-like creature {which later became known as a "penis fly trap"}. A quick mention is appropriate here of another subterranean monstrous denizen resembling a cyclopean basilisk-like penis {a "penisaurus", a-la the "one-eyed trouser snake" metaphor which blinks!} who earlier on attacked the trio as they made their way into the caves to escape Wang's effeminate guards sent out to retrieve them.

In danger of The Palace being overthrown by the earthling interlopers, Wang descends into his own Ritual Chambre wherein resides a demonic statue which, like the Golem, comes to life at his beckoning, and therefore sets out to sexplore the kingdom {I thought it particularly humorous that this creature's voice and attitude resembles that of Barry White's}, and in a decidedly Kong-like manner, abducts Dale and takes her up with him atop "The Murder Tower", were the final conflict with Flesh and company occurs.

Of particular note, a line spoken by Wang to the ungrateful invaders when admonished to remove the sex ray, was that he was doing them a favor, and I concur. The perfidious curse must be vanquished, that man's cities may truly become caves for the humanimal beasts of the field, that they may partake their fill without guilt or unreasonable restraint {as opposed to "responsible indulgence"}. And so let humanimals pleasure themselves in all manner of divine perversity - let indulgence reign supreme!

Review by Draconis Blackthorne from the Internet Movie Database.