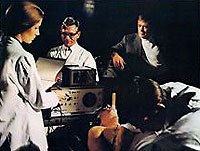 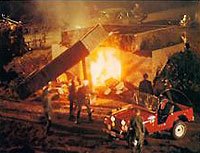 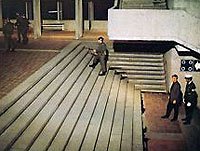 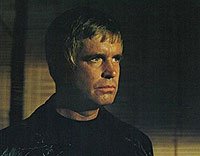 "The Groundstar Conspiracy" looks very good in its widescreen format. The visuals of the government and scientific buildings with their expansive steps, courtyards, vestibules and darkened interiors are especially memorable. There are good bits by James Olson, Cliff Potts and Tim O'Connor. James McEachin's part is not big enough, but he's always good.

A government lab has been blown up and six men killed, while a very bloodied and injured man made his way out with a computer tape. He didn't get far, only to Christine Belford's nearby house, getting her involved.

Security man George Peppard is on the case. Michael Sarrazin's jaw and face have been reconstructed and Peppard is now able to interrogate him about who ordered the theft. Sarrazin's memory is gone, however.

The story's theme of government power and spying is very well explored. George Peppard plays a government man, presumably CIA or NSA, who has extraordinary investigative power. He's totally devoted to his national security job and brooks no interference from the director of the Groundstar project or from the senator in whose state it's located. He uses wiretaps, bugging, secret cameras and more to obtain his objective. The "more" is a sci-fi element in the story, which is a technique of erasing a person's memories. Peppard as "Tuxan" lets us know that he'd bug every bedroom in America under the rationale of "national security".

Halfway through the movie, which I like despite its faults, I was wondering just how long the story could stretch out its single driving element, which is Peppard's attempts to make the memory-less Michael Sarrazin remember who he's working for. How many times can we take Sarrazin telling Peppard that he cannot remember anything? The story needed some sub-plotting. What we got was a love affair between Sarrazin and Christine Belford that was pretty bland and also quite a bit beside the point, other than that it is eventually revealed that Peppard filmed them making love.

Peppard is all authority. He also has the tools to stay one step ahead, until Sarrazin begins to take the offensive. Sarrazin's character is mostly a blank until he learns that he speaks Greek and feels no guilt over killing six men. Even then, Peppard has resources. He has the critical information. Tuxan is unlikeable, but he doesn't want to be liked and he doesn't really care if you like him or not.