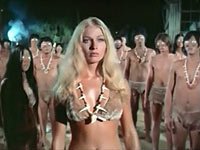 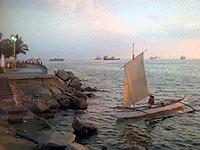 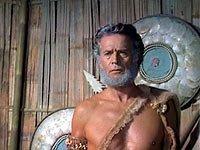 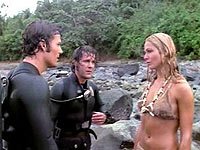 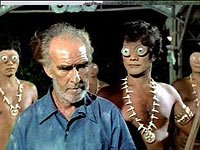 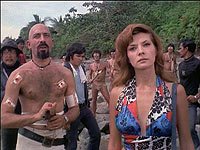 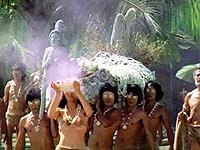 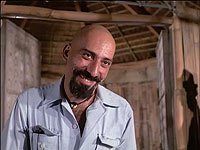 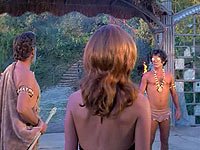 A group of fortune hunters - diver Logan (John Ashley), pimp East Eddie (Sid Haig), and boat owner Vic (Patrick Wayne) - travel by boat to a remote island where they hope to gather a fortune in rare pearls from the seabed. Also along for the trip: sexy redhead boffin Kathy (Lenore Stevens) who is looking to make an important scientific discovery. However, with the island inhabited by strange mutants who don't take kindly to strangers, will the adventurers and the lady scientist succeed in their missions or die trying?

Beyond Atlantis opens with chubby Filipino Manuel (played by chubby Filipino cult actor Vic Diaz) arriving on a tropical island with beautiful blonde Syrene (played by beautiful blonde Leigh Christian), where the lovely lady hands over a handful of pearls in exchange for supplies. Syrene then strips to a skimpy bikini, and heads for her village, arriving just in time to witness an intruder getting a spear in his back while bug-eyed natives look on.

It's a promising start to what looks set to be an entertaining piece of trashy exploitation; however, it has been my experience that the presence of Vic Diaz is seldom the sign of a great film. Or even a so-bad-it's-good film. More often than not, he appears in virtually unwatchable junk. While Beyond Atlantis isn't the worst film he's appeared in, it definitely goes downhill after the opening sequence, with way too much in the way of boring underwater scenes, and not nearly enough in the way of a decent plot or exciting action.

After much swimming - so much swimming - things do eventually pick up for a rousing final act, in which a native is eaten by piranhas, Haig blows up the islanders' temple, and Syrene and Kathy have a catfight (made all the more entertaining by being set to a piece of library music called The Awakening, best known to UK viewers as the theme to The News at Ten). A dumb final scene sees Manuel and his men trying to make off with the treasure, the box of pearls falling into the ocean during a scuffle (like the ending of The Italian Job, Logan can be heard coming up with a plan to retrieve the loot).

510. Haig is always fun to watch, but it was thanks to curvaceous beauties Christian and Stevens that I managed to make it to the end without wanting to hit the off button. And no, it's never explained why Syrene and her father don't have bug-eyes like everyone else in their tribe.