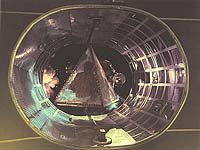 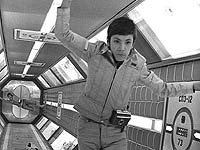 This is, in essence, a Soviet rendition of Star Trek with a teenage crew. The story revolves around a project to send a manned spaceflight to Alpha Cassiopeia to investigate a signal received from there, and, due to the relative slowness of the fastest available engines, the trip is predicted to take something around 27 years in one direction. Therefore, a crew of teenagers is recruited - in hope than when they reach their destination, they will all be aged around 40 and capable of carrying out whatever adult actions necessary to establish First Contact. But, as always, things go awry... The storyline is split up into two parts - this is the first, dealing with the foundation of the plot and the ship's launch.

It should be noted that this movie is novel in several interesting ways, including but not limited to featuring its own equivalents of Trekker favourites such as a Holodeck, The Borg, Warp Drives and even our own Soviet version of Q! The sci-fi element follows the same ideas as Star Trek does - an as-real-as-possible (at the time) approach to showing the high-tech stuff, as well as an interesting look at how unexpectedly people making up the crew can act and interact under nominal and stressed-out conditions.

If you're even remotely interested in good sci-fi (and good OLD sci-fi specifically), you pretty much owe it to yourself to watch this, probably playing a drinking game along the notion of "Yes, this was in Star Trek only AFTER this movie was made".

Review by Noelemahc from Moscow from the Internet Movie Database.