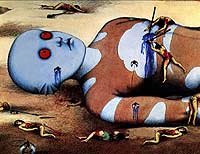 I was just watching a GoodBadFlicks video yesterday where the guy was laughing at US movie studios for buying film rights for some stories and foreign films that they could never ever present in the US for fear of protests. For me it was a strange proposal, why wouldn't they be able to show something raw, uncensored, original? The answer was obvious, but I am not going to dwell on that point.

La Planete Sauvage is probably a movie in this category. The film is short, just over an hour, but from the very beginning it starts with something controversial: a woman carrying a baby is being teased by giant humanoids that have fingers the size of the woman. It turns out they are children, playing with the human as a human would play with an ant. They accidentally kill her and her baby is being taken as a pet by one of these giants. They are called Tragg and they consider humans animals, to be petted or exterminated as they please. The very first scenes are brutal to watch and that's why I think this would never sit well with a culture that values superiority more than anything else.

You have to watch it in French, if you get the language, I had a dual FrenchEnglish audio film with English subtitles and, even if I didn't go through the English audio, there is something about the French language that just naturally blends with the arrogant culture of the Traggs. The Tragg culture and their planet were truly spectacular. To think that in 1973 someone thought of a superior technological culture that is truly alien while remaining humanoid, and did it well, was amazing. The concepts hold true even now, in 2014!

I have to say that I have been thinking of writing a story about humans treated as pets by an alien culture, but after I've seen this I couldn't possibly do it, as it is perfect as storyline and concepts. It also makes me think of another subject close to my heart: dogs. In Romania there are still a lot of vagabond dogs and the heartless and pointless discussions about exterminating them are very close to what the Tragg are doing when considering the human vermin. There are also some ideas about the "wild human" society that hit close to this concept of groups of people gathering around the mentality of the lowest common denominator. So, in my mind, to add valid philosophical and moral points to an already brilliant story with fantastic drawings is like covering the icing of the cake with a ton of cherries!

About the animation style. This is something that made some people rate this film a lot lower than it deserves. Are you aware that it was made in 1973, by Czech animators? Actually, besides the voice actors and the wonderful director René Laloux, there were almost no French people in the production team. The animation in the Czech Republic is a reason for national pride, but the way they do it was unique and certainly different from the US, French and Japanese animation styles. OK, so maybe you prefer the animation style of Robin Hood, with the animals, but really, this is so much better in so many ways that I couldn't possibly get snagged on animation.

Bottom line: The imagination, the way it just threw out there idea after idea, no matter how uncomfortable, the storyline, the amazing creatures, the weird ways in which they were killing people... it was true sci-fi. The real thing! Watch this! It will take an hour of your life, big deal! You will see that your brain will churn all of those ideas for a while after watching the film. It will feel like a strange but amazing flavor on your tongue.

Review by siderite from the Internet Movie Database.