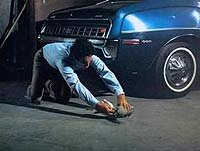 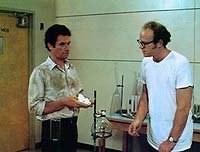 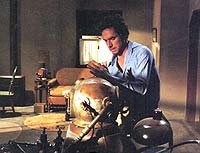 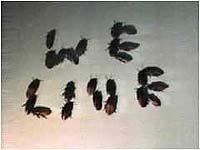 This was a surprise: not only is it a solid entry in the monster animal cycle of the 1970s, but it eventually took a totally unexpected path which elevates the film above most of its kind (reminiscent of the well-regarded PHASE IV [1974]). Another big plus here is the excellent central performance by Bradford Dillman -' his presence in any film is always welcome, but I've rarely seen him this good!

I'm not squeamish about bugs, so I wasn't bothered by having to watch a film with hordes of them menacing a community (unlike snakes, for instance -' which has kept me from checking out SSSSSSS [1973] during this Halloween challenge!); even so, it's not that the insects are used throughout for any overtly revolting effect. Like I said at the beginning -' thanks also to the unenthusing write-ups on it by both Leslie Halliwell and Leonard Maltin (online assessment at the time of Paramount's DVD release, then, is split pretty much down the middle) -' I had anticipated this to be a typical (read: low-brow) small-town-invaded-by-insects film a' la THE SWARM (1978), presenting a succession of contrived situations where various cast members meet a grisly death at the hands of the bugs.

While it has a few scenes in this vein to cater to just that section of its intended audience -' and the fact that they are combustible (their sudden emergence the direct cause of an impressively-staged earthquake) certainly provides a novel touch for this type of film! -' the second half virtually revolves exclusively around Dillman's obsession with the insects (following the death of his wife, who fell victim to them). In fact, he isolates a number of bugs in a pressurized container for experimental purposes -' the result of his endeavor is, however, far greater than he could have imagined: the concept of intelligent carnivorous bugs must have seemed like the height of silliness on paper, but there's no denying that its execution in cinematic terms is reasonably persuasive and downright scary (especially since they keep evolving into ever more diabolical creatures)!

The film makes use of an electronic score for maximum unsettling effect; incidentally, this proved to be notorious showman producer William Castle's swan-song (he also co-wrote the script with Thomas Page, author of the novel on which it was based).