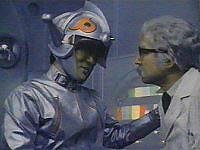 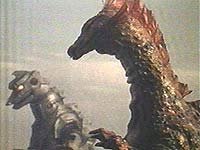 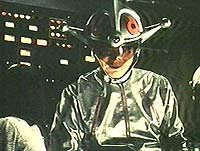 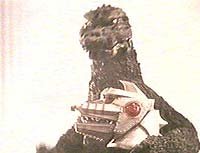 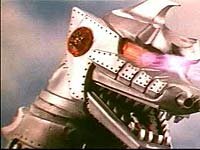 "Terror of Mechagodzilla" was directed by the late great Ishiro Honda and co-stars the late great "Godzilla" series actor Akihiko Hirata (this would be the last "Godzilla" film the actor would appear in before his death from throat cancer in 1984) as a mad scientist named Dr. Mafune, who, years earlier, had discovered a giant dinosaur called Titanosaurus.

Titanosaurus is the first monster to appear in this movie, attacking an experimental submarine that was looking for the remains of Mechagodzilla, the evil cyborg monster that had met its demise at the hands of Godzilla in the previous film. The evil ape-like aliens the Simians have recruited Dr. Mafune and his daughter to help them rebuild Mechagodzilla in their plot to take over the world. They team up, and they use their monsters, Mechagodzilla and Titanosaurus, both of which are now under the mental control of Dr. Mafune's now-cyborg daughter, to attack Japan. Godzilla soon appears on the scene to combat the two monsters and save the world.

"Terror of Mechagodzilla" is the last film of the Showa-Era series of "Godzilla" films and I can gladly say that this film was a great end to the series. One thing viewers will immediately notice is how dark this film is compared to its predecessor; apparently, Honda made a move to return the series to its dark, Atomic Age-inspired roots and it succeeds there. Still, however, a lot about this film crackles and is quite sensational and moves at a fast pace; there's even a poignant and tragic love story in there, too, and some James Bond-like spy intrigue (spy movies were quite popular at the time). One of the more outstanding qualities of the film is the ominous score by long-time "Godzilla" series composer Akira Ifukube. Ifukube's score is pretty dark and ominous, a total turn-around from Masaru Satoh's lush, beautiful, and exotic score from the previous "Godzilla vs. Mechagodzilla." A lot about "Terror of Mechagodzilla" simply makes it a fitting end to the Showa series of "Godzilla" films, despite its obvious flaws, because four main characters (Honda, Ifukube, producer Tomoyuki Tanaka, and Hirata) from the production of "Godzilla" (1954) are on-board to make sure that "Terror of Mechagodzilla" counts as a satisfying end to the Showa series.

Godzilla is and always will be the greatest movie monster that ever lived. I love Godzilla and his films. I've been watching them since I was a kid. Godzilla's transformation from rampaging menace in "Godzilla" (1954) to hero over the course of the films in the Showa series was inevitable, in my opinion, from the second that a sequel to the film was hastily commissioned by Toho in 1955 called "Godzilla Raids Again." And not to mention that the monster had become highly bankable as a children's icon over the years since his debut.

But his return to menace in "Godzilla 1985" (1984) was the first instance that Godzilla had not outlived his usefulness as cinema's greatest movie monster.