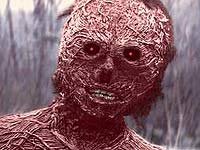 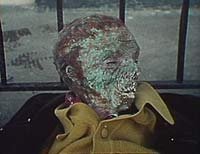 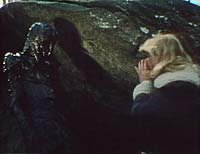 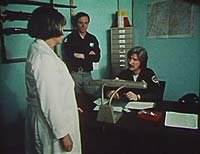 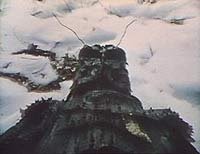 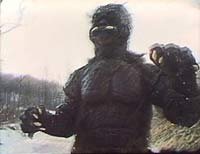 For a young Super-8 aficionado, growing up in the late 70's, Don Dohler was legend. Best known as the editor for Cinemagic magazine (and the Film Magic books), he would feature articles and how-to-do tips on everything from latex modeling to stop-motion to optical effects on the cheap. Of course, a big chunk of the contributions came from those who worked on his own features, including John Dods, John Costentinio, and Ernest Farino (who later did the stop-motion fx on THE TERMINATOR). And for anyone who read Film Magic, a big highlight was the design of the Zagatile beast that Constentino designed for use in Dohler's first feature THE ALIEN FACTOR. Constentino detailed the making of the beast, sort of an alien Bigfoot costume for a guy on stilts. Needless to say, the contributors on such articles always came across as real pros, making their work and effects sound really good in print.

Then, almost 26 years after having read Film Magic, I finally got around to seeing THE ALIEN FACTOR. Well, it sounded promising, but the reality is always different. What we essentially get to watch is a zero-budget 16mm effort featuring a group of Baltimore yokels up against two tacky man-in-suit aliens and one very well done stop-motion beast. Grainy photography, a grating electronic score, and actors with a penchant for delivering monotone speech dominate this film. Not the polished effort its makers claimed it to be, but still an interesting artifact from 70's drive-in flicks.

The plot briefly details the attempts of some local villagers to investigate a series of bizarre deaths, supposedly wild animal attacks. Turns out they are the work of three alien beings that have escaped from a downed extraterrestrial spacecraft. The Sheriff (Tom Griffith) remains baffled until the arrival of a mysterious stranger (Don Leifert), who possesses an uncanny ability to hunt down the trio of beasties.

Let us be fair to Dohler: with only local talent, limited crew, backyard locales, and miles away from Hollywood, they did the best they could. Plus, there are effective moments: the discovery of the spaceship (good use of foreground miniature); the Zagatile's attack in a man's darkened basement; and the final battle with the Lemoid, with excellent, if brief stop-motion animation from Farino. Unfortunately, Dohler's directorial abilities lagged far behind his unique talents in wrangling cheap fx. The performances are stiff, the overall pace drags, and the erratic music detracts rather than add. The effectiveness of the alien menace is hampered by either having them attack in broad daylight or showing them in full, essentially hokey Dr. Who monster outfits (the Zagatile in closeup looks okay, but in full, it just looks plain hokey as lumbers in the snow, chasing humans who are running three times faster).

With a bit of tongue-in-cheek humor, it could have been right up there with DARK STAR. Yet in spite of all its flaws, THE ALIEN FACTOR is infused with this weird low-budget horror sensibility that makes it all the more intriguing, if only for the fact that it ever got made at all. Clumsy as it is, it still entertains as a first effort. Regrettably, Dohler himself never went on to bigger and better things. He seems content to stay in Baltimore, working on zero-budget horror outings that haven't progressed (if anything regressed) beyond his opus. Considering the talent he helped to foster, it's a crying shame.

Review by plowe16 from the Internet Movie Database.