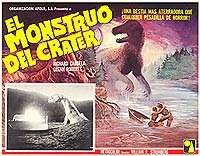 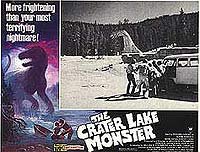 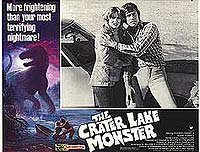 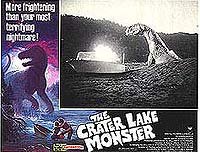 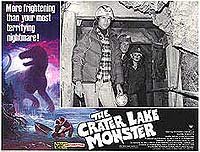 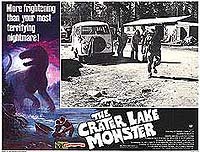 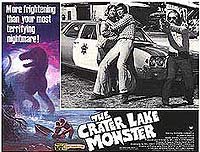 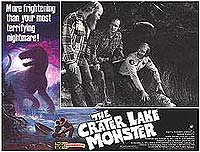 So after a meteor splashes down in Crater Lake mysterious disappearances begin to happen, predominately in the form of middle-aged white guys with mustaches - in fact almost without exception. This eventually gets the attention of a slow-witted local sheriff, who reluctantly starts up his investigation in and around the lake. Throughout the movie they included as many Jaws plot-points as possible, or at least as many as the budget and run time would accommodate. The film packs a whopping amount of "comic relief" mostly in the form of two dumb guys, who run a boat-renting business, however something has been eating all the fish, therefore killing the fishing business, which in turn wrecks their business. So naturally these two fall on hard-times and they spend half their time getting drunk, which plays out in the form of several excessively long scenes, which are loaded to the gills with their drunken shenanigans. Some folks make like these folksy scenes (Hee-Haw fans take notice) but for me there of questionable value. If you haven't guessed yet The Crater Lake Monster is hardly the most inspired movie out there and it's run time is heavily padded by an inordinate amount of scenes that are completely mundane, which often include slow and pointless camera pans and long zooms - that take forever to complete.

To no great surprise the monster itself is the best and most entertaining part of this cheap little creature feature; which is brought to life through a series of shots that include partial life-size mock-ups of the monster (or at least it's head and neck) and of course there's some corny stop-motion animation - which is my favorite part. Back to the "victims" of the monster, this movie is very, very, simple in it's construction and it keeps on presenting more and more nameless souls only to be picked-off by the monster, in fact some are on the screen for no more then a minute before they're killed. Again most of the victims are of the white and mustachioed variety - don't forget that this movie was made back in the mid-70's after all. They also felt the need to include a pointless sub-story right in the middle of the film, for apparently no reason other than to break-up the monotony for a little while, a brief change of scenery. The bemulletted, murderous liquor store robber sure is a sight to see and his condiment-infested apartment is even better - this new character, as pointless as he is (even for THIS movie) is good for few laughs, it's all good until the sheriff steps in and ends this brief side-trip. Finally the sheriff encounters the monster, only to retreat in his laughably lame olive green station wagoncop car.

After that encounter the Jaws power-wrangling tactics kick into high-gear, what to do with the damn thing, is obviously their focal point. Ultimately the ending is, like the rest of the movie, extremely ham-handed and the final show-down between Man and Beast is, not surprisingly, a disappointment. The monster is killed quickly and easily and the finale generates no tension what-so-ever. Again from my viewpoint it's the monsters goofy looking stop-motion, that provides the entertainment in this otherwise painfully lame final scene of Man versus Beast.

And now for some flattery, I'll try.......... the strong-points of this weak amateur effort are few in number, I can say that the photography is crisp, clear and colorful and it does good job of showing off the natural beauty of the Crater Lake area. On another point, the films humor, certainly not all of it, but some of it is modestly effective - in a folksy kind of way. But let me be clear there are a lot of boring parts in this movie, which really tends to bog down the movie as a whole.

This movie is just the sort of dreck that when seen nowadays's, through the cynically judgmental eyes of the jaded modern viewer, is nothing but pure comic fodder, one that's ripe for the merciless mockeries and unceasing torrents of sarcasm, from all those who it fails to impress - which is probably everyone whose ever seen it. Sure I know that may sound a bit harsh (though it does have plenty of company and I've seen a lot movies that are much worse), but if you've ever seen this movie you'll know that this ones well worthy of your scorn. In fact it's a perfectly healthy reaction to such a crappy movie.