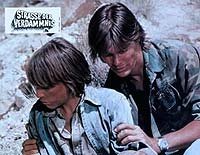 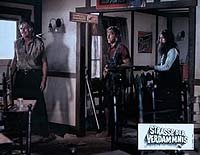 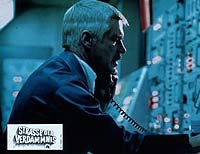 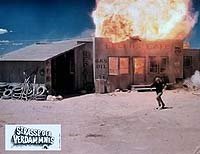 I'm not sure how to review "Damnation Alley" (1977). I can't call it a classic. Portions of it are just too poorly made for that -- even to the point where it deserves the "Mystery Science Theater 3000" treatment. But it is an extremely enjoyable 1970's end-of- the-world flick, it has some notably successful key scenes and it's nothing less than venerated by people who love 70's science fiction.

The movie's story sounds as though it were conceived by scientifically illiterate teenagers who were passing a joint around... and the joint was laced with hallucinogens, and it was the crazy 70's. A nuclear war with Russia has actually tilted the earth on its axis, so it's spinning askew. This (and apparently not radiation or nuclear winter) has caused all sorts of cataclysms, and mankind's best hope is that, through an act of God or something, the correct axis just sort of... reasserts itself. In the meantime, the same threats you'd usually expect are inhabiting 70's cinema's postapocalyptic America: sick hillbillies and mutant fauna.

A trio of United States Air Force servicemen are forced to leave a protected California missile silo that has allowed them to survive the holocaust. (It burns down after a drunk commanding officer passes out and drops a lit cigarette. Seriously.) Our heroes embark across America in the desperate hope to reach the one city that has apparently survived the nuclear fire. And that's Albany, for some reason.

I'm pretty sure Roger Zelazny's 1967 novel, upon which this is ostensibly based, has little to do with this simplistic and head- scratching screenplay. The book sounds much smarter and more interesting.

The movie gets off to a rocky start, in an ineptly blocked scene in which the director can't even manage to get the three principal actors to make their faces visible during their conversation with one another. (These would be a pre-"The A-Team" George Peppard, a pre-"Airwolf" Jan Michael Vincent, and a pre-"Terminator" Paul Winfield.") Just this after is an action sequence with "giant" scorpions that are composited on to the action via blue-screen. The special effects here are embarrassingly bad; for a frame of reference, consider that this is the same year that the studio, 20th Century Fox, also released "Star Wars."

Still, this ridiculous movie rises above its failings with some elements that were damn good. For starters, I inexplicably found myself liking Peppard's stern, laconic, Southern-drawled leader, and Winfield's likable sidekick. Even Vincent's mimbo antics weren't too grating. He must have been a fan-favorite heartthrob back in the 70's; the writer and director keep him front and center -- saving girls, cracking jokes and riding a dirtbike. (His character, "Hell Tanner," was actually the main protagonist of Zelazny's book.)

Here is where "Damnation Alley" actually reminded me of some of the better George A. Romero films. Despite thin and slightly offbeat characterizations, the protagonists still managed to turn out cool and likable. I identified with them. (Is it just because this and the "Dead" movies seem to portray real, regular people instead common tropes?)

Second, certain scenes worked beautifully. A no-budget scene depicting the inside of casino was perfectly atmospheric and haunting. The abandoned-town-with-a-secret scene was perfect, horrifying and unforgettable. (And it had some nicely conceived antagonists.) What should have been a by-the-numbers, clichéd, post-apocalyptic hillbilly gang turned out to be genuinely frightening. (The actors in these minor roles were quite competent.) Don't these prosaically characterized evildoers menace us more effectively than the clownish supervillains of the "Mad Max" films?

And, crappy scorpions notwithstanding, some of the period special effects actually worked. The centerpiece of "Damnation Alley," for a lot of fans, is the "Landmaster" -- the the quite genuine 12- wheel, seven-ton, futuristic amphibious armored personnel carrier constructed specifically for the movie. Seeing the actual (badass) vehicle instead of a model for the film should appeal to the kid in a lot of filmgoers, even today. (I'm not even a gearhead, and I had fun with it.) The custom vehicle cost $350,000 to build in 1976, and it's still a legend in the 70's science fiction fan community.

Another "special effect" that strangely holds up over time is the movie's depiction of "radioactive skies." It's a gaudy visual effect that would be cheap and low-tech by today's standards, and it absolutely screams "1970's cheese." Yet, as a modern movie fan, I loved it. It's perfect for setting the film's unintentional clumsy- yet-creepy mood; it sets the tone for a beloved vintage B-movie classic, and it's just neat to look at. Wikipedia has some interesting information on the back ground for "Damnation Alley" -- the radioactive skies effect actually took up 10 months of post- production, despite a final result that paled in comparison to "Star Wars." It was a troubled production, and its story is interesting reading.

Seriously, I had fun with "Damnation Alley." If it isn't quite a "classic," the it's at least a really fun movie to which I'm sure I'll return. I'd give it an 8 out of 10, and I'm going to label it a Triple F -- it's a Forgivably Flawed Favorite.

Review by ericrnolan from the Internet Movie Database.

Sep 10 2017, 14:21
A bad movie yet there is something which is incredibly entertaining.
Additional Off-Site Reviews: