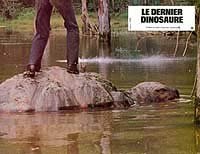 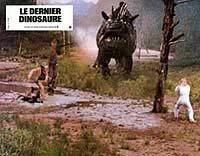 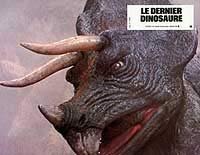 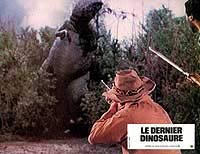 Prepare to meet your Messiah - they call him Masten Thrust. Male role models have become increasingly difficult to find in today's overexposed society. Every other day an apparent role model is forced to tearfully apologize for a youthful indiscretion or he innocently gets a few youngsters drunk on his ranch. The Last Dinosaur is the story of the last great hunt of Masten Thrust, an old, grizzled, big game hunter who serves as role model supreme. Despite his haggard features and bulbous nose, the females, including Joan Van Ark, are attracted to him like Meatloaf is to cheesy lyrics. Thrust is openly sexist and makes no apologies for his elaborate lifestyle, which includes a red kerchief and a private jet with a working fireplace.

Thrust embarks on a mission to find and hunt the last dinosaur on earth when ironically, after a rich full life, he is truly the last dinosaur. Despite his propensity for yelling at everyone in his presence, his employees and lady friends are unwaveringly loyal to him. He may act as though he's perpetually drunk, but make no mistake, if he calls you a 'Ding Dong' you are a 'Ding Dong'.

Not to be denied his own ballad, Thrust's song shamelessly praises him and his manliness. A sampling of lyrics includes: "Few men have ever done, what he has done, or even dreamed, what he has dreamedFew men have even tried, what he has tried, most men have failed, where he's prevailedThe world holds nothing new in store for him, and things that startle you and me, are just a bore to himFew men have ever lived, as he has lived, or even walked, where he has walked'. Even BMTG banned artist Clay Aiken could belt out those lyrics and become an rump-kicking machine.

Thrust and his crew of scientists strap themselves into the 'Polar Borer' wearing mini bike helmets, though Thrust affords himself the luxury of the red kerchief around his neck. The giant human filled drill bit digs through the earth and ice to come popping out into a lagoon. Dinosaurs from the air and land soon descend upon the scientists forcing Thrust and crew to run for their lives. After narrowly escaping a charging dino, Masten lays back and blasts out a hearty laugh, not so much to celebrate life but to acknowledge 'the game is afoot'.

Soon after, it is little surprise that we see a few slightly hunched over cavemen sneaking peeks at their visitors. Thrust, not content with simply killing a dinosaur, decides then to make it his mission to bag a cave broad. Throughout the movie, the lone T-Rex contradicts the belief that dinosaurs have a brain the size of a peanut. Despite its enormous size, the local T-Rex is able to sidle up next to its victims virtually unnoticed. With the element of surprise, T-Rex simply crushes a scientist or two and loots the campsite. Every so often the bloated and cagily faced Thrust is seen yelling at someone, shooting at something or flirting with a primitive J-Lo in manly fashion.

Thrust is like James Tiberius Kirk, not only in his addiction to love, but also when is comes to making complicated weapons using limited natural resources in a short period of time. Thrust and the remaining crew members construct a highly accurate catapult that flings a large boulder into the skull of the cunning T-Rex. Upon realizing that even he, Masten Thrust, cannot top this addition to his trophy case, Thrust decides to stay in his prehistoric surroundings. The ever-dwindling crew then leaves Thrust to live out his days with his lovely, although a bit gamely, cavewoman and introduce her to his personal collection of STDs. This is only a brief synopsis of a movie so complicated and rich in BMTG tradition that it takes several viewings to absorb its message and realize that Masten Thrust is the answer. The press conference, complete with a yelling Thrust, mumbling reporters, and the introduction of the great Bunta, is a classic moment. Also look for a body, resembling a dead Ricky Schroeder, lying on some logs, and the most powerful use of someone being called a 'Ding-Dong' in cinematic history.

Review by The Diesel from the Internet Movie Database.